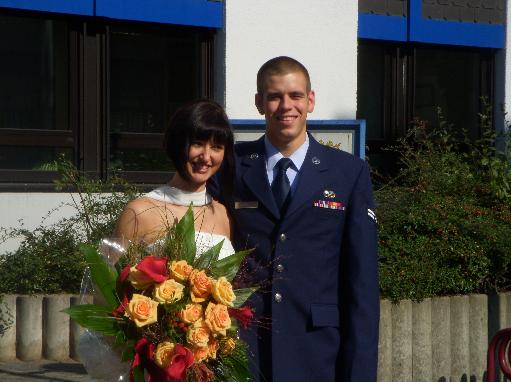 A long-time TNT swimmer, and one of the original team members as the club regained momentum during a re-birth, has committed to marriage. Jared was the first individual who transferred from the Visalia program to Tulare in pursuit of swimming accomplishments. He currently maintains six team records in multiple age groups, has competed at the Western Zones, Grand Prix, Sectional and Junior National levels in club swimming, and was one of only two of our swimmers to have had the opportunity to compete in the same heat against world renowned Michael Phelps. Jared swam against Michael Phelps at the Grand Prix meet held at Stanford University approximately three years ago.

Jared lived in Visalia where he graduated from Golden West High School, and his family had moved to Exeter. Soon after graduation from high school, Jared joined the Air Force to serve his country, and is currently stationed in Germany. Jared is now happily married to a young lady from Germany, and has moved into their first house with already a new addition to their newly created family  a puppy Weimaraner