TNT scored a total of 2917 points at JOs which was high enough to place third at the meet behind Clovis and Santa Maria. Our relays contributed to 1066 points, and our individual events accounted for 1851 points. Tule Nation Tritons scored 219 points ahead of Bakersfield and was 233 points behind Santa Maria and 395 points behind Clovis. Points from individual events were led by Josh Avila (training in Visalia and scoring 132 points), Katelyn Herrera (training in Tulare  128) and Parker Giles (training in Hanford  118).Our sole age group high point winner for Junior Olympics was eight year old Preston Nayesh winning high point honors in the 8-under division.

Five team records were broken by four different swimmers at the Junior Olympics. Record breaking performances were led with the two broken by Sam Hansen. After establishing records in both the 800 and 1500 meter freestyle events at Sectionals just the weekend prior to Junior Olympics, Sam dropped six seconds in the 800 (8:57.10) and nearly a quarter of a second in the 1500 (17:05.35) freestyle events. His 800 is now less than one second from the Long Beach Grand Prix cut. Twelve year old Josh Avila became another record breaker, breaking his first team record for 11-12 boys in the 100 meter breaststroke event. Joshs 1:24.02 is nearly a second and a half faster than one of the longest standing team records in the books. The previous record (1:25.59) was set by Micah Storey at Zones in 1989. Greyson Canterbury joins Josh in becoming a first-time record breaker by setting a new standard in the 50 meter freestyle for the 11-12 boys. His 29.51 breaks Jason Ricablancas 29.86 set in Bakersfield in 1994. Prior to departing to Hawaii for the Western Zone Championships, 14 year old Nathan Rhea broke the team record for the 13-14 boys 200 IM with a 2:21.71. The previous record of 2:25.46 was held by Jared Hopper, and was set at Zones in Arizona in 2003. 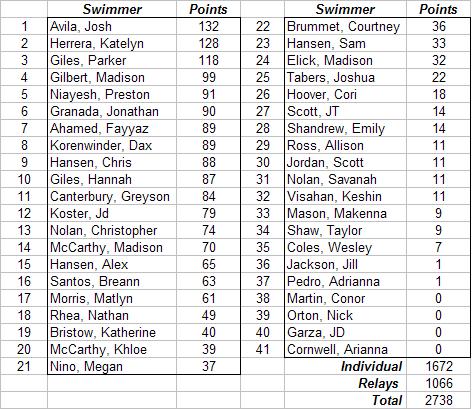 Below is the list of swimmers who improved 50% or more of their times. All times improvements are based on times that have been pre-recorded with TNT. Welcome to Owen Ansel, Matlyn Morris and Mandi Mccaslin 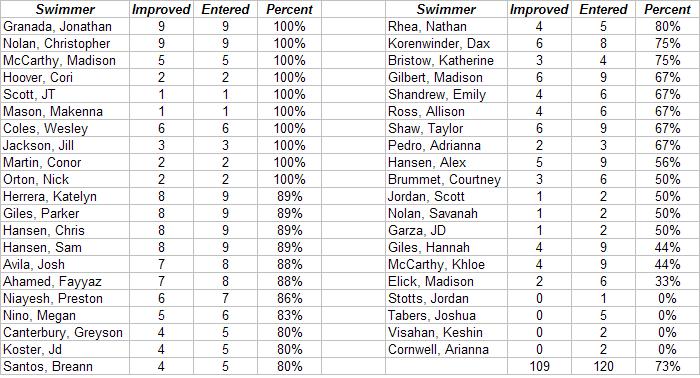