Still11-year-old Mallory Korenwinder along with coach Angela Martinho were awarded an interview with the local paper based on Mallory’s national 7th place ranking for all 11-year-olds during this past long course ranking cycle. Mallory ranked 7th in not only one event, but both long course breaststroke events (50 meter and 100 meter breaststrokes). She became one of only two swimmers between the ages of 11 and 16 in all of Central California Swimming to rank among the top 10 in the nation. Samantha Goates who is currently competing for Louisiana State University (LSU) was our other swimmer who ranked among the top 10 in the nation, and her 1:57.52 was fast enough to rank 9th among all 18 year olds in the nation and is an NCAA “B” cut. 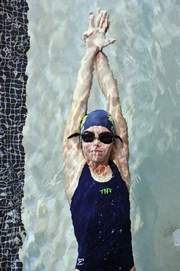