This past weekend’s local paper has named Kohlton Norys as one of the five recipients of the Athletes of the Decade.

The Times Delta, along with the Fresno Bee and Channel 30, have been very supportive of our swimmers over time, and continue to be so. Along with those highlights that were listed in the paper, here are a few others about Kohlton that our new members may not be aware of:

Kohlton was the fastest collegiate 100 yard backstroker in the nation this past year by winning the NCAA Championships in that event. His 45.13 that the Times Delta listed places him as the 7th fastest backstroker ever in the United States (which includes one non-USA athlete). Only 4 swimmers in the United States have ever gone under 45 seconds in the 100 yard backstroke: Ryan Lochte (44.60 in 2006), Ben Hesen (44.72 in 2008), Albert Subirats (44.83 in 2007), and Neil Walker (44.92 in 1997).  Kohlton’s swim is listed as the 8th all time performance even when considering repeated times nationally. This means that only seven other swims were ever faster than the time he swam this past year (and this includes two swims by Albert Subirats). Ryan’s time of 44.60 is the American Record which places Kohlton a mere .53 seconds away.

Since Kohlton is in Division 1, this made him faster than any 100 backstroker from any college, including Stanford, Berkley, Texas, Michigan or any others. By the way, this was done while he was only in his second year in college. It’s believed that he is the first swimmer from Central California Swimming (CCS) to have ever won a Division 1 NCAA Championship. His race can be viewed at http://www.tritonblog.org/ and can be found in the March archive of postings (March 31st entry to be more specific).

Kohlton broke the National Age Group (NAG) record the previous year in the 17-18 age group. To help put this in perspective, the 200 yard backstroke NAG record was held by Michael Phelps, and both the 100 and 200 short course records were held by Natalie Coughlin. Both swimmers of course went on to the Olympics.

Kohlton became a nationally ranked age group swimmer for the first time while he was in the 15-16 age group, and then of course based on his National Record, became the fastest swimmer in the nation in the 17-18 age group – and also the first one in the history of the sport to break 47 seconds in the 100 yard backsgtroke while still in the 17-18 age group. For the sake of college recuriting, ranking nationally is arguably valued rather highly when it is accomplished in the older age groups (most importantly in the 15-16 age group).

Kohlton made the Western Zone meet for the first time while he was in the 13-14 age group. His first and only trip to Zones was to Arizona back in 2003. He was a finalist his first time out.

Not only did Kohlton begin to set team records beginning with his arrival to the team in the 13-14 age group, he went on to set Central California Swimming records and the National Record. Kohlton continues to return to the Valley to share his experiences with youth who are in club swimming, high school, and summer league programs.

Here’s the article on Kohlton: 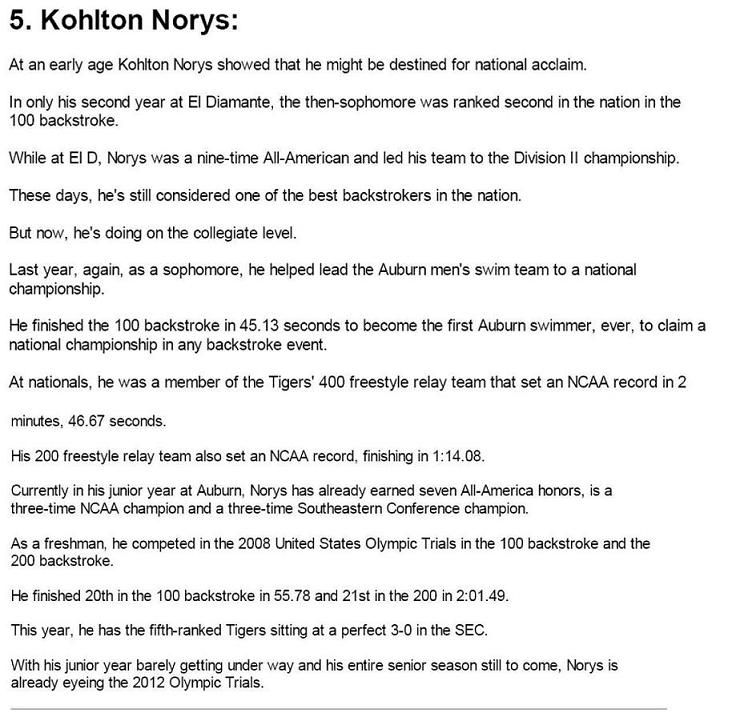