Two age group team records were reestablished as a result of the Selma meet in October. Each of the two records were broken by three individuals each. The 11-12 girls 1000 freestyle team record was successfully defended by now 12-year old Khloe McCarthy. Khloe had set the record at 12:53.58 in November of last year as an 11-year old at the Yosemite meet. Now at age 12, she reset her record to 11:51.10 which is a qualifying time for this past years Far Western meet. Her time is currently the 255th fastest time among all 12-year old girls in the nation. Two other 11-12 year old girls swam under Kholes pre-existing team record during the meet, and they included Mallory Korenwinder swimming a 12:04.63 (currently the 314th fastest in the nation) and Allyson Duffy who swam a 12:07.68 (which is the 328th fastest time in the nation among 12-year old girls).

Our other tri of swimmers who swam faster than the previous team record were the 10-under boys in the 100 breaststroke event. While only 9-years old, Preston Niayesh had set the 100 yard breaststroke record as 1:2617 at Far Westerns this past April. During the Selma meet Dax Korenwinder swam 4 seconds under the preexisting standard with his 1:22.21 which is currently the 134th fastest time in the nation for all 10-year old boys. Still only 9-years old, Preston Niayesh nearly defended his records by swimming 1:22.93, and this time is currently the 25th fastest time in America for all 9-year old boys. Ten-year-old Alonzo Escobedo training in Hanford was the third swimmer to swim under the preexisting record, and his time of 1:25.01 is currently the 221st fastest time in the nation. These are back-to-back record breaking performances by Dax Korenwinder and Alonzo Escobedo who both swam faster than the team record in the 50 breaststroke at the previous Hanford meet.

Tule Nation Tritons scored 3,553 points which was approximately 1,500 points beyond the next placed team. 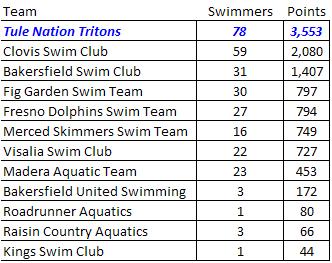 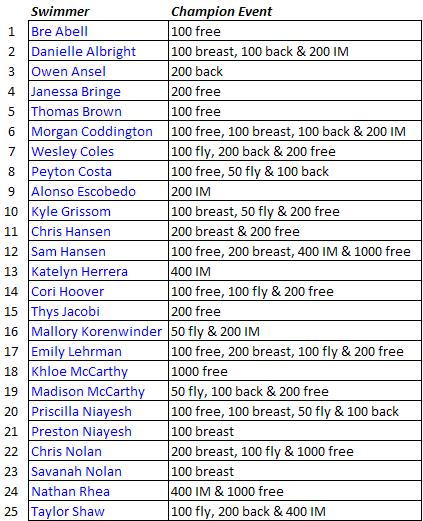 The team improvement percentage was a very respectable 65% with 23 of our 78 swimmers improving 100% of their times. 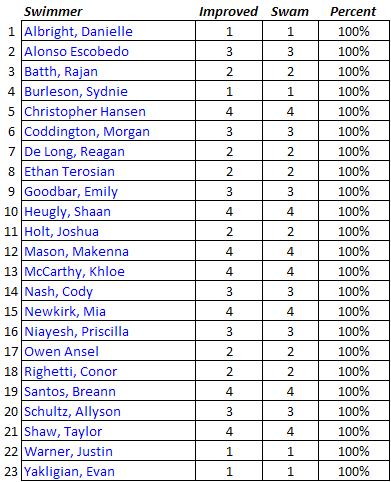