The top 3 High Point recipients for each gender and age group at the Last Chance meet were recognized, and TNT swimmers swam away with 2 of the 3 awards in many of the divisions. The 6-udner boys division was led by high point winner Ian Belfower of Bakersfield and runner-up Jacye Ford of Visalia. The 7-8 girls division was led by Danielle Albright and 3rd place recipient Alex Roberts training with Bill, while on the boys side Jackson Huckabay of Selma led all 7-8 boys followed by runner-up Peyton Costa. The 9-10 boys division was led by Visalia swimmer JD Koster followed by 2nd place finisher Jonas Huckabay of Selma, while the 11-12 girls were led by Mia Newkirk and 3rd place finisher Allyson Duffy. Bill Freemans swimmer Conor Martin swam away with the honors in the 13-14 boys division, while Matlyn Morris, who also trains with Bill, took home the top spot for the 15-over girls. The 15-over boy division TNT recipients were runner-up Sam Hanson followed by 3rd highest point-getter Nathan Rhea.

Sixty-one TNT swimmers were among approximately 350 who competed at the Last Chance meet in Tulare during the last weekend of February. Fifty-seven of our swimmers had previously recorded times with the team, and of those 18 swam away with perfect improvement rates. The overall improvement was 68%. Jacob Koorey was our only swimmer among the 100% list who swam a total of 10 events, nine of them previously recorded, and improved 9 of 9. JD Koster of Visalia also swam a heavy schedule of events, improving all 9 of 9 events that he had entered. Jacob Goodbar of Selma and Conor Martin training with Bill Freeman were our other two swimmers who swam and improved 6 or more events each  Jacob with 7, and Conor with 6.

A warm welcome to the team goes to LaurenBinaski, Jeanette Ewy, Daniel Magaree, and Adam Simonian who swam events that are newly recorded with the team.

Congratulations to all swimmers who improved, and especially to those who maintained a 100% improvement rate: 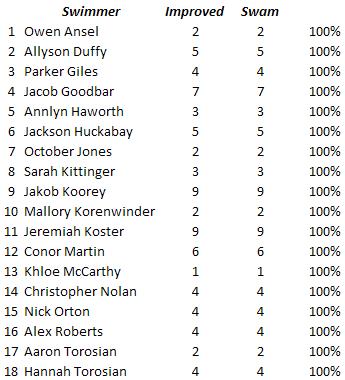