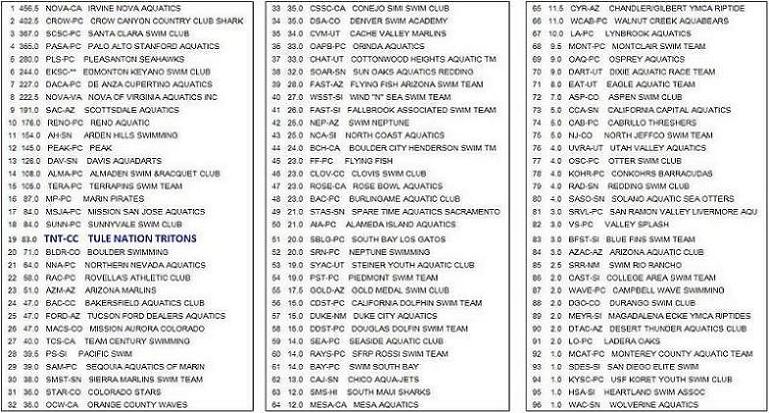 A team of 16 swimmers traveled to Morgan Hill for the Far Western Championships during the first weekend of April to join over 1600 other athletes representing over 170 teams from states such as Arizona, Colorado, New Mexico, Utah, Virginia, Nevada, as well as the city of Edmonton in Canada. Going into the last day, Tule Nation Tritons held 16th place out of the 96 teams that scored at the meet. Mission San Jose and Sunnyvale Swim Club each moved past TNT by one point during the final day of competition. TNT finished 19th overall.

The overall team improvement percentage of 59% was led by perfect 100% improvement rates from Parker Giles of Hanford (improving 1 of 1), Emily Goodbar of Selma (4 of 4), Kyle Grissom of Porterville (1 of 1), Jonas Huckabay of Selma (3 of 3) and Mia Newkirk of Hanford (6 of 6). Those improving 50% or more of their times included: Mallory Korenwinder (86%), Khloe McCarthy (67%) Allyson Duffy of Hanford (57%), and Amber Khieralla of Bakersfield (57%).

A total of 11 individual event performances were under a current team record, with one being under a Central California Swimming record. Twelve year old Allyson Duffy swam 18:29.66 in the 1650 freestyle event which dropped her preexisting team record from 18:33.20 set only last month at the Bakersfield meet. Her time currently ranks 42nd in the nation among all 12-year old girls. Tristin Baxter of Clovis who competed at D-1 NCAA Championships in her first year of college this year had set the 11-12 girls 1000 freestyle record in 2004 at 11:01.05. This record fell to Allysons 5th place performance at Far Westerns of 10:57.02, which now stands as both the CCS and team record as well as the 35th fastest time in the nation. The previous team record of 11:38.34 was set by Khloe McCarthy in Arizona last December.

Twelve year old Mallory Korenwinder led the team both in second swims and in record-breaking performances. Mallory began with the 100 butterfly event by swimming 1:02.68, edging out Ambers record-breaking performance of 1:02.82. Both girls swam well under the preexisting record of 1:03.84 set by Lynnie North in 1989. Mallory went on to qualify for Sectionals in the 200 breaststroke with a time of 2:28.54 that ranks 21st fastest in the nation.  Her performance broke her own record of 2:33.26 set in Bakersfield during February. Mallorys 50 fly time of 27.67 edged out Mia Newkirks record breaking swim of 27.84 in a swim off that reset the team record in the 50 fly, both girls swimming within a half second of the CCS record which stands as 27.18 set in 1999 by former Auburn swimmer Kristen Hastrup. Mallorys 100 IM time of 1:03.57 was again within one second of the CCS record of 1:02.76. She and Amber swam 4 combined times in the 100 IM alone that were under the preexisting team record held by Samantha Goates and set in 2002 while competing at AAs. Mallory had already set the 50 breaststroke record while at JOs as a 32.69, and now reset the standard at 32.27 which was .6 seconds off of the CCS record. Her final record breaking swim came with the time of 1:09.56 in the 100 breaststroke where she once again swam under her previous record of 1:09.96 set at JOs two weeks earlier.

Mia Newkirk earned a second swim by way of a swim-off for first alternate with teammate Mallory Korenwinder. Both girls not only swam a time during the swim-off that would have qualified for a championship swim, but both girls also swam under the pre-existing team record. Mia swam 27.84 which was under Amber Khierallas previous team record set two weeks ago as 27.93 at Junior Olympics. Mias time currently ranks 104th in the nation and was also a mere .75 seconds off of the CCS Record. 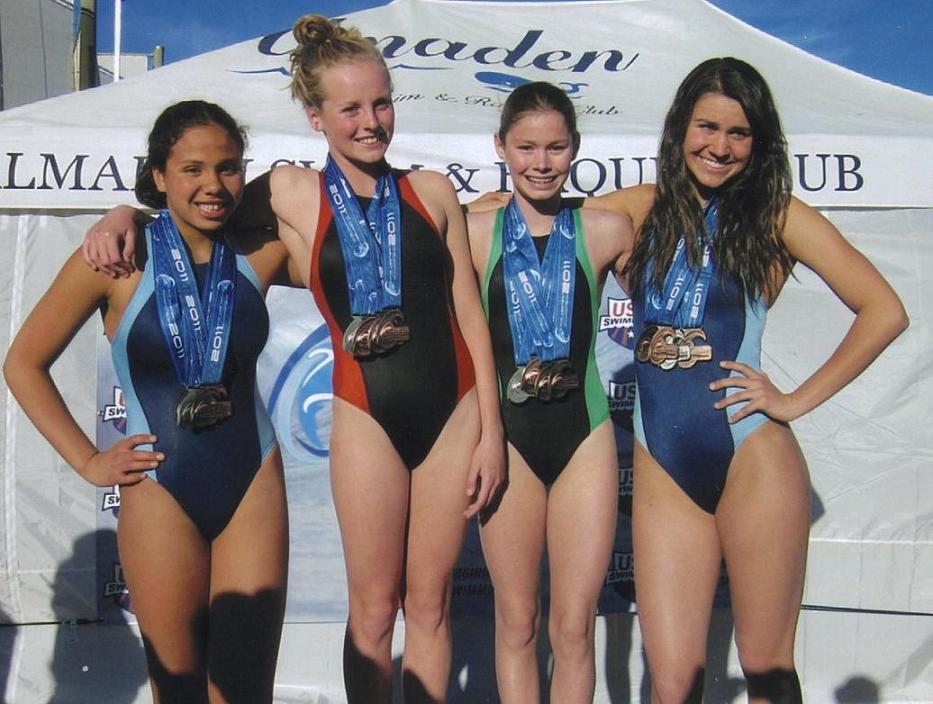 Swimming World Magazine provided live on-demand viewing opportunities during finals at Far Westerns. These videos can still be viewed for those who are interested in watching the top 8 competitors of each event, along with the relays that took place during finals. Click on Swimming World’s video coverage of 2011 Far Westerns to view the nightly finals that took place.