Tule Nation Tritons traveled to Golden West College over the third weekend of December with only 7 swimmers, yet brought home the 1st place trophy for the Small Team Division, outscored the next nearest team by 110 points, and finished as the 14th highest scoring team, despite team-size division, at the meet. Our 363 points were led by the nearly undefeated performance of Kolton Norys who is now a recent graduate of Auburn University. Winning four of his five events, and placing 2nd in the 50 free, Kohlton single handedly amassed 156 points. 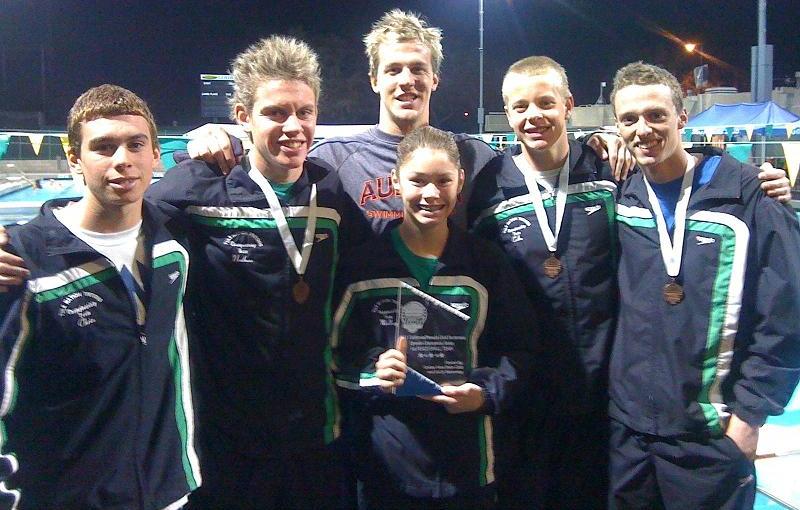 Our impressive mens team of Wes Coles, Colin Landweer, Chris Nolan, Kohlton Norys and Nathan Rhea, in a truly team-manner with each individual without exception contributing, accumulated 360 points on the mens side of scoring alone. Only one other team, AZOT from the large team division, accumulated more points on the mens side of the meet. Three relays were entered into the meet, and all three scored resulting in a total contribution from relays of 154 points. All three relays were also under the qualifying time for USA Nationals in their respective categories, and one (400 medley relay  3:25.41) resulted in a bronze medal performance, and was also under the CCS Record in the senior division. Wesley Coles, Colin Landweer, Kohlton Norys and Nathan Rhea teamed up for all relays placing 6th in the 800 free relay (6:51.85), 4th in the 400 free relay (3:08.67), and 3rd in the 400 medley relay. 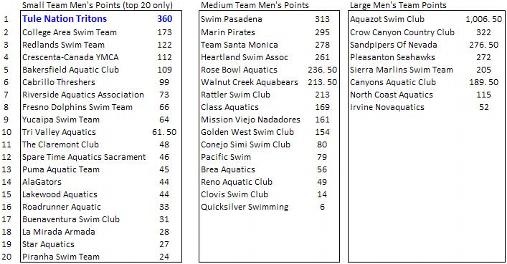 Our team out scored all but one team at the meet on the mens side, despite the size of the any team, and despite the fact that we only had 5 male swimmers. This dominant performance was reflected in the early days of the meet. However, no total point accumulation can be counted toward a combined team score unless both male and female swimmers score at the meet. The Sectional meet follows the team scoring protocol conducted at Nationals. Without a single point from a female swimmer going into the fifth and final day of the meet, our team was not represented on the combined team score list for team placing considerations.

Qualified in only 3 events, Mallory Korenwinder already swam her 200 yard breaststroke event (2:24.18) on day 2 placing 39th in the event (up from the 46th place she was entered at). She had 2 events left: the 100 fly which she didnt have a short course cut for, and the 100 breaststroke where she was the 57th seed, well beyond her initial seeding of 46th in the 200 breaststroke event. Only the top 24 swimmers could earn a second swim, and thereby score at the meet.

Mallory qualified for the meet with a 1:07.75 in the 100 breaststroke, and in the preliminary heats of the last day she swam 1:06.47 to place 25th, a jump of 32 places. An impatient wait of 30 minutes would reveal two girls who decided to scratch, thereby placing Mallory into scoring position. Mallory swam her exact time of 1:06.47 in the bonus heat, moving up one additional place, and scoring 3 points for the team, and in a shot at the buzzer fashion, brought home the 1st place trophy.

Reminiscent of time improvements among age group swimmers, our teams improvement percentage was over 81%. Although Kohlton may not have topped his personal best, he was surprisingly close in several events, considering he was competing at a caliber of meet that he has moved well beyond. He did; however, improve all his events that were previously recorded with our team. Other 100% improvements also came from Wesley Coles who had back-to-back 100% improvements when considering Junior Nationals that he recently attended. After a hand injury, Chris Nolan still managed to not only earn a second swim, but also improve 100% of his times. Mallory Korenwinder was our other swimmer with a 100% improvement rate. Both Emily Goodbar (75%) and Colin Landweer (67%) each maintained improvement rates at 50% or higher. Congratulations Emily for her first appearance at Sectionals.

Mallory Korenwinder also set two new team records at Sectionals. Her scoring performance in the 100 breaststroke came with a time of 1:06.47 (twice), and this was under the 1:07.75 record breaking performance that she had at the Terrapin meet only a month earlier. Mallory has now qualified for the Santa Clara International meet with that time, and her time is the 39th fastest for any 13-year old girl in the nation for 2011. Her other record was in the 200 breaststroke where she swam 2:24.18, once again surpassing her Terrapin time of 2:24.94, and swimming the 32nd fastest time in the nation for any 13 year old girl during 2011.

Wesley Coles set a new team record in the 100 breaststroke with a time of 1:00.08, thereby silencing any questions as to his ability in the stroke. The previous record belonged to Sam Hanson, now competing for Canisius College in New York. Sam set the record at Sectionals last year with a 1:00.18. Wesleys time is ranked 394th in the nation for all 17-year old boys for the entire year of 2011. Colin Landweer was our other swimmer with a record breaking performance by swimming 1:55.93 in the 200 IM event at the meet. Nathan Rhea had set the record last year at Sectionals with a 1:57.42. Colins time ranks 296th nationally for 17-year old males.