Seven team records were set by five TNT swimmers while at the meet. Two of Kyle Grissoms championship swims also resulted in team records. His 53.66 in the 100 fly is an improvement to his 54.56 time that he posted as a new record while at Junior Olympics in February of this year. His new record currently stands as the 87th fastest time for a 14-year old male in the nation. His 22.86 in the 50 freestyle event is a new record for him, breaking the 23.15 that was set by Colin Landweer while at the Merced meet in 2009. Kyles new record in the 50 free is the 197th ranked time in the nation for the age, gender and event.

Mallory Korenwinders two championship swims were also improvements to her preexisting team records. Her 2:23.19 in the 200 breaststroke is an improvement over her time of 2:24.19 that she swam at Sectionals last December, and currently stands as the 19th fastest time in the nation for all 13-year old girls. Her 1:05.85 also topped her Sectional scoring swim of 1:06.47 (that was repeated at both preliminary and final heats at Sectionals) and is also currently ranked as the 19th fastest time nationally for 13-year old girls.

Ten year old Janessa Bringe made her first appearance at Far Westerns, and her time of 2:19.59 set a new team record in the 200 freestyle event, and was a 23rd place finish at the meet. The previous record was held by Khloe McCarthy and set as 2:19.74 at the Hanford meet in 2008. Janessas time currently ranks 388th nationally for all 10-year old girls.

Fourteen year old Emily Goodbar set the team record in the 200 fly for the first time at the Terrapin meet last November with a time of 2:11.55, then went on to improve the record at the Fullerton meet to a 2:09.67. Now at Far Westerns, Emily continues to improve her team record, and now her time of 2:08.62 stands as the 100th fastest time in the nation.

Micah Ruizs 25.47 in the 50 freestyle was fast enough for a first alternate position at the meet for the 11-12 boys division. Twelve year old Micah went home with the team record in the event by swimming under Kyle Grissoms 25.51 that he had set as the record while at the San Luis Obispo meet in November of 2010. Micahs time currently stands as the 305th fastest time in the nation for all 12-year old boys.

Congratulations to all 17 TNT swimmers who qualified for a meet which has a time standard, if only reached sets a swimmer apart from the general group of athletes. The following is a list each of our 17 swimmers, their age, highest placed event, and their time in that event: 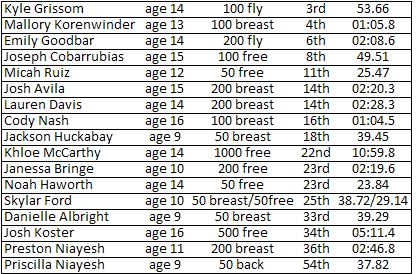 Tule Nation Tritons also successfully completed one 10-under girls relay that placed 16th at the meet with a time of 2:04.64 and was composed of Skylar Ford, Priscilla Niayesh, Alex Roberts and Janessa Bringe.