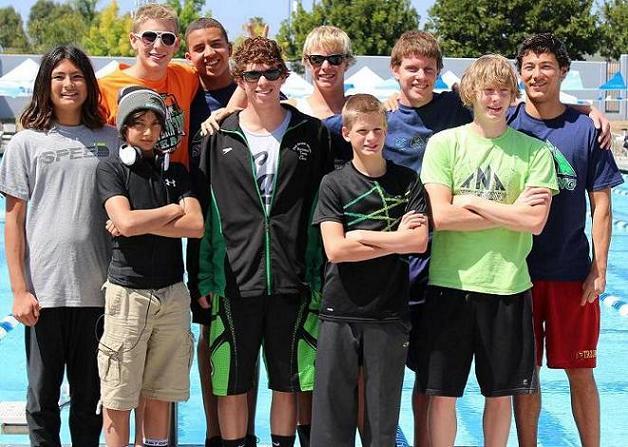 Ten athletes qualified for, and attended the 2013 Speedo Grand Challenge held in the Irvine facility that will host the US Open and Junior National Championships later this summer. This is the second year that the meet invited swimmers in a 5-12 age division, but only if they’d reached the stringent minimum time standard. The 12-under swimmers competed for one of the top-8 places for their championship finals, while 13-over swimmers competed for one of the top 20 places in finals, only the top four eligible for the championship heat and cash prize (for professional athletes only of course).

Two of our swimmers competed well enough in the preliminary heats to earn second swims. Twelve year old Preston Niayesh made his second trip to the meet, and this time came away with two championship final swims, placing seventh in both the 50 and 100 meter breaststroke events. Preston’s 37.54 in the 50 breaststroke was over two seconds faster than his previous time, and both his preliminary and final time fell under our team’s previous team record set as a 38.18 by Kyle Grissom in 2010 at Junior Olympics. Preston’s 100 meter time 1:20.92 was nearly six seconds faster than his best, and again both his preliminary and final times fell well under the team record, this time set by Josh Avila at Junior Olympics in 2009. Preston’s 50 meter time currently stands as the 66th fastest in the nation, while his 100 meter time ranks 42nd nationally for all boys of age 12.

Christopher Nolan was our only other finalist at the meet in the senior division that allowed for the top 20 swimmers to return for consolation finals. Chris had his highest finish of 7th in his specialty, 200 meter fly event with a time of 2:05.82, and he followed this performance with an 8th place finish in the 100 fly event with a time of 57.51.