Time improvements from Jillian Hatch and Matlyn Morris while competing at Sectionals over the July 17-21 weekend enabled an aggregate qualifying time for the upcoming Junior Nationals to be held in December. Selma swimmer Jillian Hatch led off the 400 freestyle relay with a time of 59.27, while Matlyn Morris swam 1:08.27 in the individual 100 meter backstroke event. These two times, combined with Mallory Korenwinder’s best 100 meter breaststroke time of 1:12.21 and Selma swimmer Emily Goodbar’s top 100 fly time of 1:05.91 combines for a 4:25.66 sliding just under the 4:25.79 minimum time standard for Winter Junior Nationals to held in Greensboro, North Carolina over the December 12-14 weekend. Our girls are 1.97 seconds off of the summer Junior National standard that stands at 4:23.69. 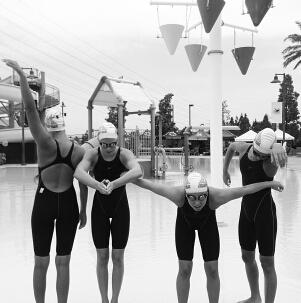 Our 15-16 girls of Jillian Hatch, Katelyn Herrera, Emily Goodbar and Khloe McCarthy swam a time of 8:53.21 in the 800 freestyle relay to break the CCS record of 9:04.87 that the TNT team of Katelyn Herrera, Mallory Korenwinder, Lauren Davis and Emily Goodbar had set at the LA Invitational earlier in the month.

Jillian Hatch not only swam to two individual event finals, but also led the team in the number of team records broken. She began with the 200 free by swimming under her preexisting team record of 2:08.77 not just once, but three times while at Sectionals, her fastest being 2:07.47 swam at finals in the individual event. The time stands as the 35th fastest nationally for girls of age 15. She went on to swim 4:30.13 in the 400 free and break the record that Katelyn Herrera had set as 4:36.81 just the previous weekend at Clovis. Jillian’s time stands as the 30th fastest nationally. Her final record came in the lead-off leg of the 400 free relay where her time of 59.27 set the 15-18 team record that was set by Megan Eppler at Junior Olympics in 2008. The new record stands with a national ranking of 25.

Mallory Korenwinder took back her team record in the 200 breaststroke, ownership of which seems to toggle between her and Lauren Davis. Lauren had set the record as a 2:41.27 at the LA Invitational earlier in the month, and along with Mallory, went under that preexisting record. Mallory’s time of 2:40.47 currently stands as the 14th fastest nationally for girls of age 15. Mallory’s championship swim of 1:13.83 in the 100 breaststroke improved her preexisting record of 1:14.66 that she swam at Mission Viejo last month, and the time ranks among the top 8 nationally.

Our only other team record-breaking performance in individual events came in the 200 fly where Chris Nolan’s 2:04.74 topped his own team record in the event that previously stood at 2:05.46 set last year at the very same meet and pool. Only four other 17-year old swimmers had gone that time or faster anywhere in the nation this year.