Four TNT swimmers competed at the USA Swimming Junior National Championships in Greensborough, North Carolina over the second weekend of December. Graduating senior, Chris Nolan, was the sole finalist for TNT making his first finals at a Junior Nationals while he took the team into scoring position on the men’s side. Chris swam three events and a time trial, capping his performance on the final day with a 1:49.29 in the preliminary heats of the 200 yard butterfly which was fast enough to move him to a 12th place seeding into finals, after being seeded 27th going into the meet. Chris swam his second time under the 1:50 mark during finals where his 1:49.57 finished 13th in the event. He swam twice under his previous team record of 1:50.66 that he set in February at the Clovis meet, and his current record stands as the 12th fastest nationally among all 17-year old male swimmers, just over three months into the reporting cycle. Chris also set a new team record in the 200 IM which was his time trial event. He improved well over four seconds in the event to a 1:55.55, and a time that slides under the previous team record of 1:55.88 that was set by Colin Landweer at Junior Olympics this past February. This time stands as the 122nd fastest nationally. 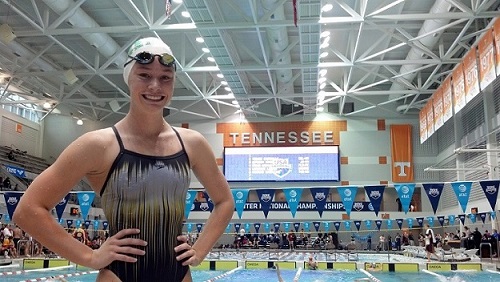 Although ten swims out of 15 resulted in improvements over previous times, Kyle Grissom was our only swimmer to improve 100% of swims that included two qualified events, and one time trial. His highest place came in the 32nd place finish from his bonus event, 50 free, where his time of 20.84 broke Bradley Matsumoto’s 15-18 team record of 21.18 set in 2004 at Winter Invite. A time of 20.72 earned a top-24 final spot. Kyle’s new team record currently stands as the 9th fastest nationally after just entering the age division. Kyle also broke the team record in the 100 fly where his time of 50.16 was under Kohlton Norys’s previous record of 50.22 set in 2005 at the Winter Invitational. This time currently stands as the 22nd fastest nationally. His final improvement was his 46.79 that resulted from nearly a two second drop in the 100 free. 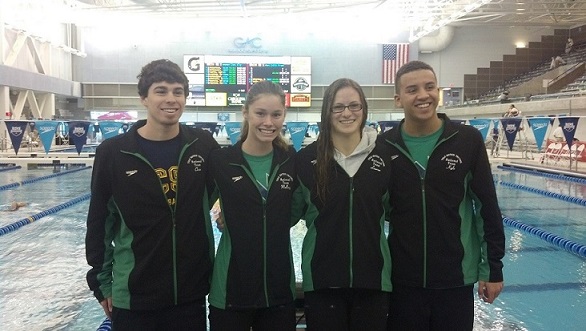 Lauren Davis of Fig Garden attended her second Junior National meet, and first short course Junior Nationals. She came away with her highest finish of 100th in her qualified event of the 200 breaststroke, and a lifetime best of 2:21.96 which was over a half second improvement. Her largest drop came in the time trial 100 free event where her 55.45 was 1.36 seconds faster. She also competed in the 100 breaststroke, where he 1:05.96 was enough for a 119th place finish in a field of over 140 athletes.