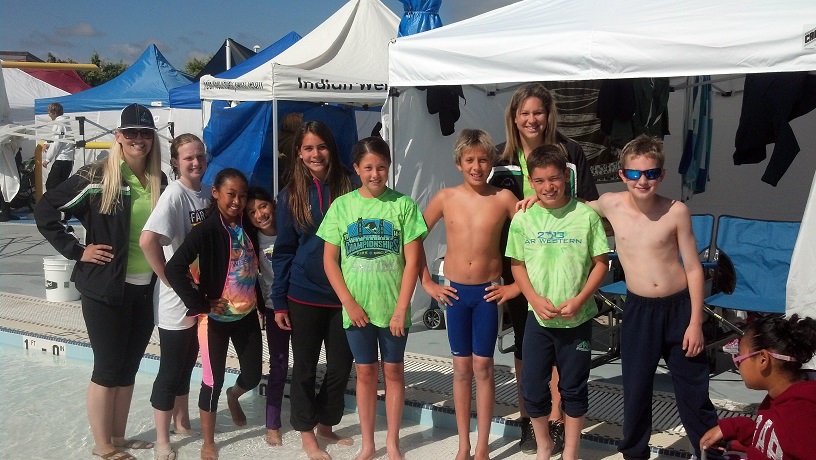 Ten year old Visalia swimmer Kylie Walker came away with the most impressive overall performance for any of the eight TNT swimmers attending the 2014 Far Western meet that took place over the first weekend of April in Morgan Hill. She improved three of her five events with the largest drop of over one second in the 100 fly where her time of 1:04.75 was not only a silver medal finish in the event, but is also currently the 9th fastest time posted by any 10-year old girl in the nation. Needless to say, her Far Western swim was an improvement of her previous team record of 1:05.99 that she swam at Junior Olympics two months earlier. Kylie’s other second place finish was in the 50 fly where her time of 29.11 slid under her preexisting record of 29.31 that she set at Junior Olympics, and her current time also stands as the 9th fastest nationally. Her final time improvement, and new record, also resulted in a championship final. Kylie swam 1:00.50 in the 100 freestyle, once again going under her preexisting record of 1:00.78 from JO’s, and finishing 8th in that event. This time currently ranks 64th nationally. She rounded out her four finals with a 27.60 in the 50 freestyle, a time that was enough for a 5th place finish at the meet.

Two additional individuals set team records, both in the 10-under boys division with one resulting in a championship final that fielded ten swimmers. Peyton Costa improved three of his ten events, the 100 back by a margin of over three seconds. The 1:11.29 earned a spot in the top-10, where he moved from 10th to 9th, and went well under Jonathan Granada’s 1:13.34 that he posted as the previous team record at the Selma meet back in 2009. Peyton’s time stands as the 223rd fastest nationally.

Visalia swimmer Benjamin Wheeler had one of the highest improvement percentages at the meet, improving three of his four events, the largest in the 500 freestyle where he improved by over 16 seconds. His time of 6:06.32 was well under the previous team record set four years ago by Alonso Escobedo at the Arizona meet as a 6:10.63. Benjamin’s time stands as the 260th fastest for any 10-year old in the nation.

Three of our swimmers improved 100% of their times, and the improvement rates were led by Toby Jones who improved six of six events, the largest drop of nearly 19 seconds in the 200 IM being the largest improvement by any TNT swimmer at the meet. Toby’s highest place was 18th in the 100 breaststroke. Danielle Albright qualified at the bottom of the age group, and improved her single event (50 breaststroke), and finished 35th there. Visalia Swimmer Janessa Bringe competed in two events, and improved by nearly five seconds in the 500 free. Her highest finish was 36th in the 200 fly. Visalia team mate Layla Flores improved two of three events. Her highest finish was 29th in the 100 breaststroke, while Selma swimmer Madison Pallares had her highest finish as 50th in the 50 breaststroke event.