Twelve year old Wyatt Ward of Hanford was the sole medalist among our team of eight who attended the Speedo Grand Challenge swim meet over the Memorial Day weekend. The championship final heat at this meet is limited to the top 4 performances in the preliminary heats for swimmers 13-over, and only the top four performances are recognized on the podium for any event. Wyatt Ward swam 37.55 in the 50 meter breaststroke on day 1 to finish 3rd in that 12-under event, and ended his meet with a 4th place finish in the 100 meter breaststroke in a time of 1:22.57 for that event. 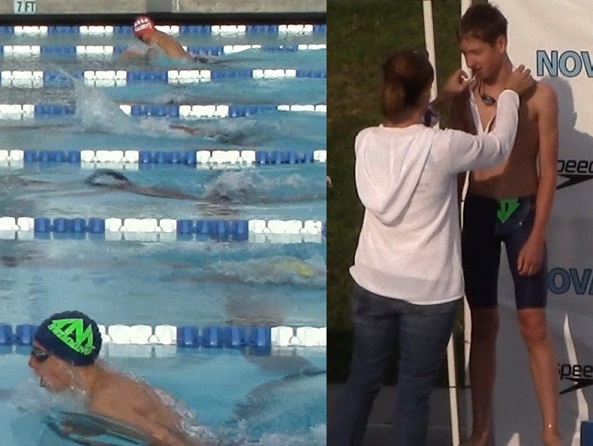 Two other swimmers earned second swims, with Danielle Albright making it to the championship final, and 8th place finish, in the 100 breaststroke after swimming a 1:26.44 in the preliminary heats while only eleven years old. Danielle was the youngest competitor at the senior meet that was host to swimmers like Karlee Bispo, Bobby Bollier, Jessica Hardy, and Mike Alexandrov, and representing teams from the likes of USC, Stanford, and countries such as Portugal and Guatemala. Kyle Grissom was our only other finalist as he placed 13th , winning the B-consolation heat with a time of 56.99 in the 100 meter butterfly.