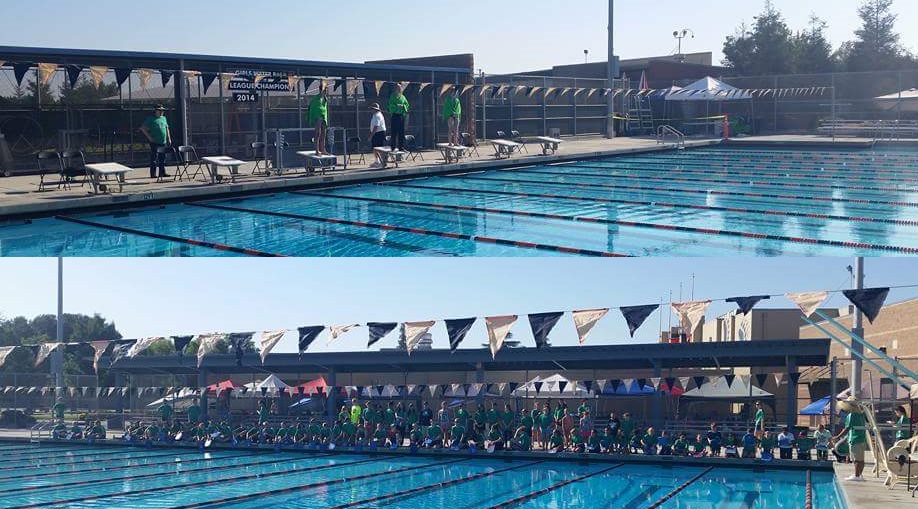 Tule Nation Tritons was in force during our hosted tri-meet versus runner-up teams of Conejo Simi and Roadrunner respectively over the September 19-20 weekend. Our 117 athletes combined a total point accumulation of 7,024.50 points that resulted from 42 gold medal performances, 51 silver medal performances, and 56 bronze medal performances, and was led by Selma’s eight year old Sienna Abernathy whose eight first place finishes, one second place finish, and one seventh place finish generated an astounding 189 points from individual events alone. Her point accumulation surpassed any other individual at the meet. Tule Nation Tritons had eleven swimmers score among the top 20 at the meet. A total of 109 TNT swimmers scored at the meet, this being of the 179 total, leaving only 70 scoring swimmers from the other teams. Our top 11 scoring swimmers 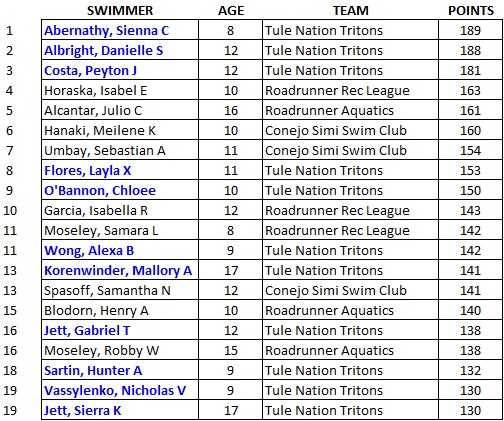 Fourteen year old Preston Niayesh earned a second place finish in the 13-over 100 breaststroke event, swimming a time of 1:02.81, and this time falls under the team record that was previously held by Nathan Rhea and set at Sectionals in December of 2009 as a 1:02.90. Preston set both long course 100 and 200 meter breaststroke team records earlier this summer, and now his 100 yard time stands as the fifth fastest nationally for male swimmers at age 12 here at the beginning of the reporting cycle that began September 1st. There are currently approximately 406 times reported nationally.