USA Swimming annually recognizes individuals as Scholastic All America swimmers if they have been successful both in the classroom and in the swimming pool. This year, Central California Swimming lists seven individuals who have met the minimum requirements, and over half of them are TNT swimmers. Scholastic requirements include a minimum grade point average of a 3.5 during their sophomore year, while at the same time attaining a challenging time standard. 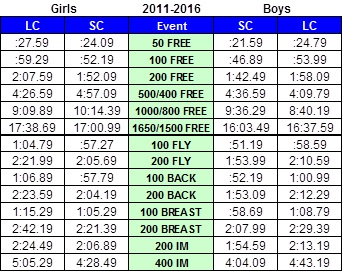 Current Kingsburg High School Senior, Owen Ansel, obtained the All-America status on the performance side while competing at the Western Senior Zone meet this past summer while posting his first Futures time standard. Owen was among 1,000 students who earned a spot to participate in the West Point Summer Leaders Experience last June at West Point, New York indicating his leadership and academic foundation. Owen is our current team record holder in the 100 meter breaststroke.

Entering her first year competing for the University of the Pacific, Lauren Davis is a product of Coach Caroline Reynaud while coaching the Fig Garden Dolphins Swim Team. Lauren has competed at both USA Swimming’s Summer Junior Nationals and Winter Junior Nationals since 2013, as well as Grand Prix level meets in Mesa, Arizona, and Santa Clara International. Lauren is our current team record holder in the 200 meter breaststroke event. She is a two-time recipient of the All-America recognition, and maintained a grade point average above the 4.0 mark.

Kyle Grissom is competing in his first year for USC, and is a Porterville High School graduate who is a three-time USA Swimming Scholastic All America recipient since his sophomore year. Kyle competed at multiple Junior National meets, and is a multi-finalist at that level, most recently this past summer where he earned his first Olympic Trial cut. Kyle holds the CIF D1 Valley record in the 100 yard butterfly, as well as CCS records in the event. He has been ranked top-10 in the nation multiple times across multiple age divisions.
Mallory Korenwinder is among the top graduates as she works through her senior year at Tulare Western. Already committed to compete for the University of Arizona this coming fall, Mallory has been nationally ranked (top-10) in multiple years, and in multiple age divisions. She has qualified for, and competed at multiple Nationals, both winter and summer meets, and had earned a top-8 finish at Junior Nationals before entering high school during the summer following her eight grade year. Mallory has the most experience at the national level among all our athletes, currently, or historically, and maintains a grade point average above 4.0. She has been a Scholastic All America swimmer since her sophomore year.