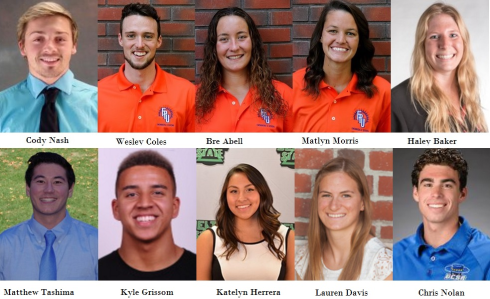 Katelyn Herrera attends her first conference championship meet swimming for Delta State at the New South Intercollegiate Swim Conference Championships (NSISC) that takes place over the week of February 17-20. Katelyn scored 22 points with a championship swim, and 8th place finish, in the 1000 freestyle swimming 10:40.03 in the event, being the third Delta State swimmer in the race. She went on the finish 13th in the 400 IM, improving over three seconds to a 4:41.57 during the preliminary heats, and then shaving off hundredths during finals for a 4:41.52. She is the top seed in the consolation heat for the 500 free after swimming 5:08.71 in the preliminary heats.

Matlyn Morris joined Wesley as she returns from multiple injuries, and scores by finishing sixth in the B-final of the 50 free with a time of 24.45, and seventh in the B-final of the 100 free where she swam a time of 53.35. She makes the A-final in the 100 back swimming a time of 58.68 and finishing seventh there. Fresno Pacific women finished fifth at the meet behind UC San Diego, Cal State East Bay, Loyola Marymount and Pepperdine.

In her second year of collegiate swimming for Fresno Pacific, Bre Abell earned second swims in the scoring C-final of the 50 free swimming 24.84 and finishing 6th in that heat. Her highest place was third in the B-final of the 200 free where she swam 1:56.15 there. She also scored in the C-final of the 100 free where her 53.63 was enough for a 5th place finish.

Lauren Davis, competing in her first year for the University of the Pacific (UOP), has made the travel team for the University, and competes at the MPSF Championships that runs from February 17th to 20th. She squeezed into the C-final in the 100 breaststroke with a time of 1:07.75, and is currently seeded 14th in the 200 breaststroke.

Joining Lauren at the MPSF Championships is Chris Nolan competing for UC Santa Barbara, and who is seeded 1st in the 200 fly with his time of 1:46.81. Chris did move from 16th in the preliminary heats of the 500 free where he swam 4:36.07 to 15th during finals in the event. He held on to a championship seeding in the 100 fly swimming a lifetime best of 48.81 going into finals in 8th place.

Cody Nash is currently competing at the Ohio Athletic Conference (OAC) Championships for Wilmington College, and he earned a 3rd place finish in the B-final of the 500 free with a time of 4:57.20 after being seeded 21st in the event. He is the 2nd highest scoring Wilmington swimmer for the 500 free. He was seeded 13th in the 100 breaststroke with a 1:03.61, and then swam 1:01.35 in the preliminary heats to go into the B-final heat in 2nd. Cody is seeded 9th in the 200 breaststroke with a 2:19.11.

Kyle Grissom’s Pac-12 Championships are scheduled for March 2nd through 5th as he competes for the University of Southern California (USC).