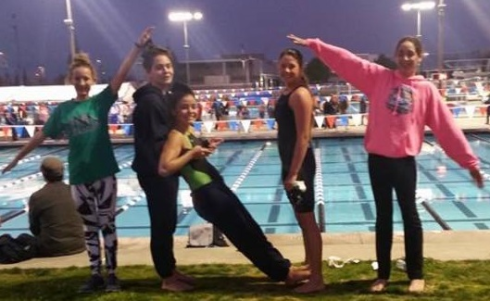 Fifty seven TNT swimmers competed over the February 12-15 weekend at one of two championship meets. The largest group of our swimmers (35) competed at the Junior Olympics where the team held a third place finish among the 32 teams that scored at the meet. Twenty eight of our thirty five swimmers scored in individual events, and this effort was led by Danielle Albright who accumulated 140 points in individual events, and taking home wins in the 400 IM (4:40.82), 500 free (5:13.04), and 1000 freestyle (10:40.02) events. Her swim in the 1000 freestyle is a new team record in the 13-14 age division that she just entered. Her time slid under Megan Eppler’s record of 10:40.93 that was set also when she was 13 in 2005 at the Junior Olympics. Danielle’s time currently ranks 40th nationally for swimmers at age 13.

Porterville’s Diego Gutierrez was our next highest point getter at 92, generated partly by his winning swim in the 11-12 boys 100 freestyle, where his 55.75 was over a four second improvement in the event. Our next highest point accumulation came from Hanford’s Rylee Lord at 85 points, and her highest finish was a 4th place in the 11-12 girls 200 freestyle where her 2:06.38 was over a five second improvement. Tule Nation Tritons had two additional event champions, and these included Tristan Gaines whose 19:02.23 was enough for a win in the 1650 freestyle, and Ava Olson who took home the gold in the 10-under 100 fly with a 1:12.65 which exceeded a three second improvement. Tristan and Ava accumulated the 4th and 5th highest points on our team behind Danielle, Diego, and Rylee. Selma’s Lucas Huckabay (76), Visalia’s Layla Flores (66.5), Hanford’s Dylan Hunt (65), Selma’s Sydnee Wilson (37), and Selma’s Drew Johnston (27) rounded out our top-10 point getters for individual events. Other finalists included: Sofia Mora, Emma Pena, Xavier Gutierrez, Ciara Clarke, Madison Pallares, Libby Adriaansen, Wyatt Ward, Ella Bettencourt, Luke Pena, Elizabeth Torres, Daniel Haley, Annlyn Haworth, Tanner Kelm, Sienna Abernathy, Kaden Medeiros, Katherine Forbes, Maya Herrera and Natali Herrera.