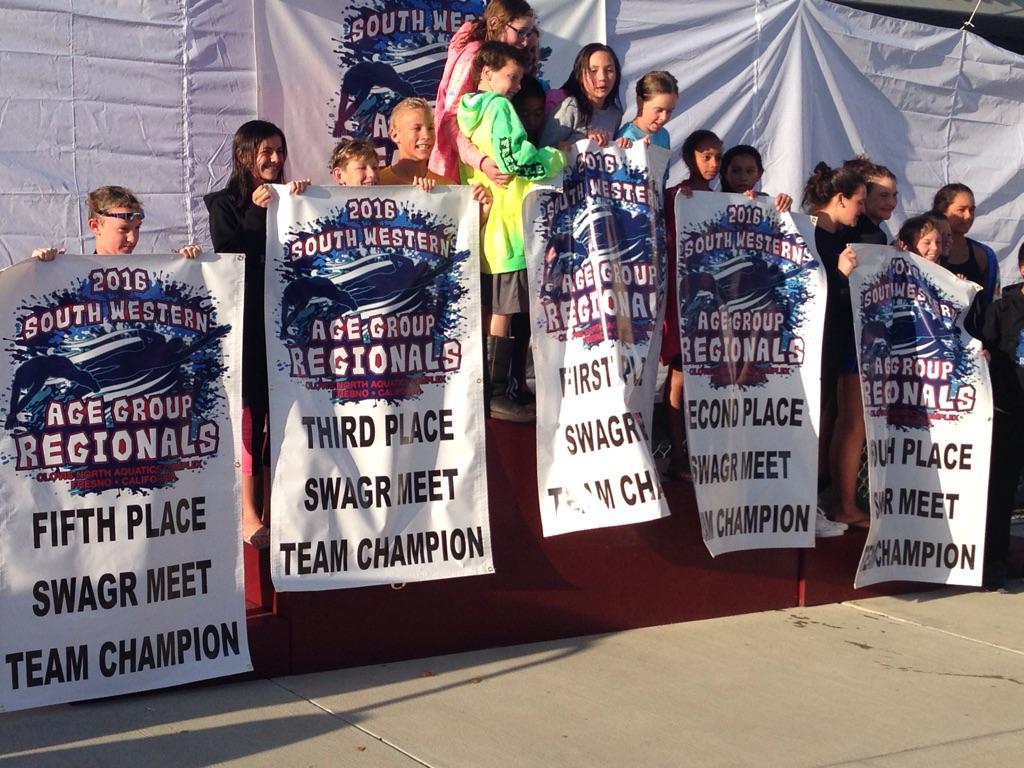 A mere fourteen “attached” TNT swimmers attended the inaugural South Western Age Group Regional meet hosted by Clovis, and without entering a single relay over the four day meet, TNT managed score 400 points to place 5th behind Davis-Arden Hills (1640 points), Clovis (1564), Mission Viejo (800), and Tucson Ford (565), and ahead of California Capital (374). Twenty eight teams entered the meet with team sizes ranging from the 58 swimmers of Clovis, to a single swimmer from each team that included Bakersfield Aquatics, Bakersfield Swim Club, Fresno Dolphins and Spare Time (of course, many swimmers were unattached who may have represented these teams). There were 291 swimmers attending the meet. The meet format included final heats in individual age divisions that included the 11, 12, 13 and 14 divisions. The 10-under swimmers competed in one age division.

Performance at the Clovis meet has increased our team’s participation in the upcoming Far Western Championships in Pleasanton within two weeks. Our Far Western team of eight no longer has any individual qualified in only one event. Congratulations, and good luck to our 2016 Far Western Team of Danielle Albright (13-14), Visalia’s Janessa Bringe (13-14), Peyton Costa (11-12), Visalia’s Layla Flores (11-12), Porterville’s Diego Gutierrez (11-12), Hanford’s Rylee Lord (11-12), Ava Olson (10-under), and Alexa Wong (10-under). 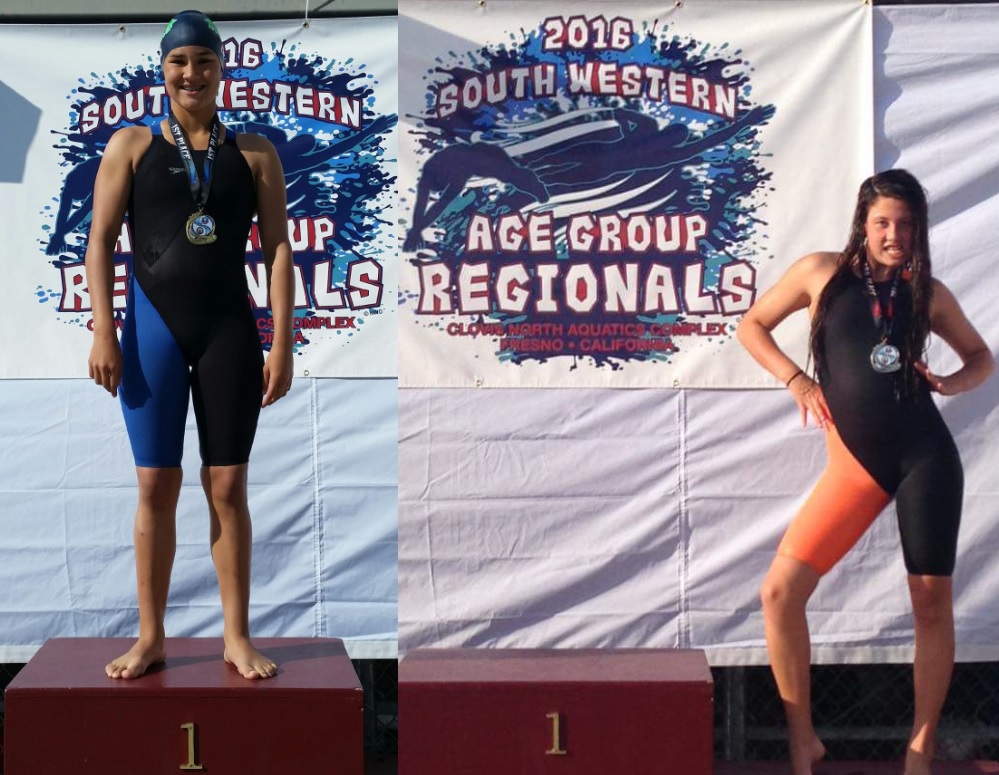 Six team records fell at the meet, and these were led by Danielle Albright whose 17:40.29 in the 1650 freestyle was not only a new 13-14 team record, but also stands as the team’s Senior record, making her time the fastest in the history of the team, regardless of age. Her time went well under Megan Eppler’s previous record of 17:54.47 set over ten years ago at Sectionals in 2005 while she too was 13 years old. The Senior record was held by Katelyn Herrera, set when she was 16 as 17:45.35 at Sectionals in 2014. Danielle’s new record stands as the 42nd fastest nationally for girls at age 13. Danielle also slid under Mallory Korenwinder’s 4:34.81 in the 400 IM by swimming 4:33.96. Mallory had set the record at Clovis three years earlier in 2013. Danielle’s record in the 400 IM is posted as the 59th fastest nationally. She swam twice under the team’s existing 1000 free record, once as an intermediate split of the 1650 (10:37.87), but then improved that split to a 10:34.19 during the individual event. She improved her own record that she set as a 10:40.02 at Junior Olympics last month in February. Her time now is the 45th fastest nationally.

Peyton Costa doubled up with team records, also breaking two in one swim. He swam the 1650 freestyle with a time of 18:59.00, being the first TNT swimmer in the 11-12 boys division to post a time under the 19-minute mark, thereby improving his previous team record of 19:33.65 that he set at the Tulare meet this past December. His time stands as the 161st fastest nationally for 12-year old boys. He split 11:30.18 at the 1000 freestyle point in the race, and this split took him under his 11:41.41 that he set as the team record last November in Tulare. This time stands as the 241st fastest nationally.
Benjamin Wheeler was the only other record-breaking swim, in an event that seems to go back and forth between he and Peyton, and from one meet to the next. Benjamin originally set the team record as 2:25.29 at the Age Group Championships in San Diego while training in Visalia this past December. Peyton subsequently broke the record with a time of 2:24.72 at the Canyons meet last month. Now Benjamin regained the title, swimming under the pre-existing record twice, and now setting the new standard as a 2:22.36. The new record stands in the 700th spot nationally for boys at the same age. 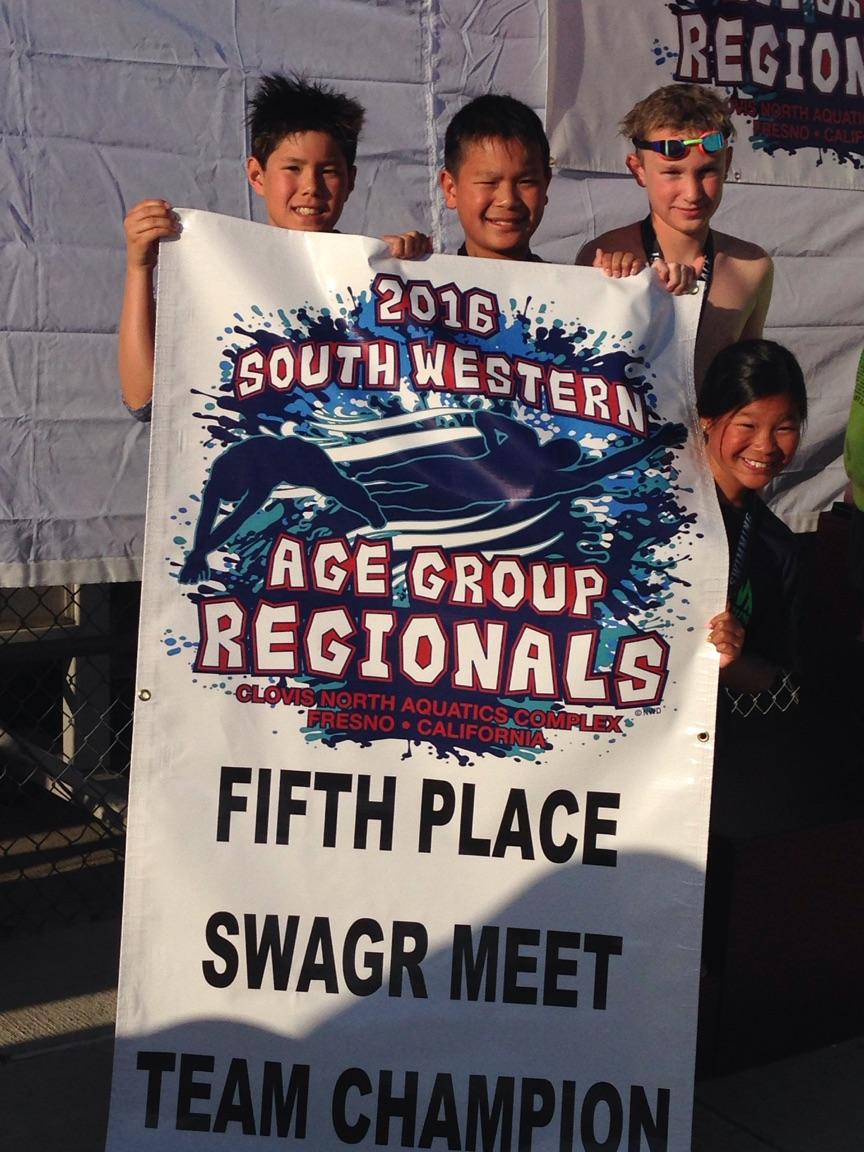