Four past and current TNT swimmers competed at the 2016 Olympic Trials, and all four made their first appearance at a meet that defines the National Team to compete at the Olympics in Rio over the August 6th-13th week.  This year’s Olympic Trials swim meet reflects participation from the largest group of athletes that have gone through our program. Kohlton Norys and Bradley Matsumoto were the two athletes to attend the 2008 Trials, while Kohlton and Megan Eppler both competed at the 2012 Trials. This year Wesley Coles, Kyle Grissom, Mallory Korenwinder and Chris Nolan all competed at the meet.

Wesley Coles has been a TNT swimmer from the 10-under age division, and quickly achieved a Junior Olympic time standard in the butterfly event shortly after joining the club in Tulare. Wesley began his swimming with the Lindsay Skimmers. His 10-under times with our club go back to 2004, and can still be seen on our All Time Top 100 lists, holding position for twelve years. After a few years of no Junior National qualifiers on the team, Wesley was our first athlete to bring our team back to the national stage in 2011 by qualifying and competing at the long course Junior Nationals held at Stanford, and then going on to the Winter Junior National meet at the University of Texas in Austin for the short course meet there. In 2012, Wesley traveled to Omaha with our team to compete in the Swimvitational meet which served as a pre-meet to the 2012 Olympic Trials. Now in 2016, under the guidance and training of Josh Christiansen of Fresno Pacific University, Wesley qualified one year ago to attend the Olympic Trials this year, and swam a lifetime best time of 54.48 to finish 56th in the 100 meter butterfly event at the meet.

Kyle Grissom achieved an Olympic Trial qualifying time while competing at the Junior National championships in the summer of 2015 in San Antonio, Texas by swimming a time of 54.18 in a consolation final, improving nearly a full second from his preliminary swim. Kyle’s earliest 100 butterfly meter times with club were posted in 2010 and reflects a time of 1:17.30 in May of that year. This is an improvement of over 23 seconds in the span of five years, and he is a product of swimming that began with the Porterville Neptune summer league program, and Visalia’s TNT club program, prior to his training in Tulare. Kyle is one of only a few of our club swimmers who qualified for Olympic Trials prior to entering college, and had entered the Junior National/National levels of competition for the first time at age 15 when he competed at the long course Junior Nationals in August of 2013. He has completed his first year competing for the University of Southern California under the guidance of Dave Salo. Kyle posted a season best time of 55.17 at Trials and a 94th place finish, and his time is his fourth fastest swim on record. 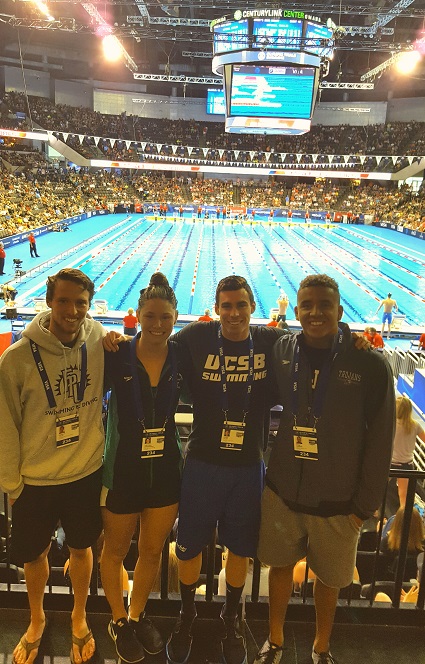 Mallory Korenwinder is our first athlete to not only qualify for Trials prior to college, but to compete at the meet as a pre-collegiate athlete. There are only eight TNT swimmers listed on our team’s All Time Top 100 performances for the 100 meter breaststroke event for the 15-over division, and one reason so few are listed is because Mallory has posted the top 53 times, leaving only 47 spots for the remaining swimmers, and she has eight of those. She achieved the time standard for Trials at the end of May with a time of 1:11.26 at the Speedo Grand Challenge meet which was four weeks before Trials. The time standard she needed was 1:11.49, and consider that she swam 1:11.56, and 1:11.63 at Junior Nationals in the summer of 2014. Mallory’s earliest 100 meter breaststroke time was from April of 2007 where she swam 1:48.34 in Merced at the age of eight, which is an improvement of over 37 seconds in nearly ten years. Mallory has the most experience of any TNT swimmer at the Junior National/National level as she began competing at that level in 2012 when she was 14 years old. Mallory’s Olympic Trial time of 1:12.96 finished 110th at the meet. She will be attending, and competing for, the University of Arizona this upcoming fall under the guidance of Rick Demont.

Chris Nolan had the highest place finish for any of our four swimmers competing at Trials, and he is one of the two who posted a time improvement, swimming a life-time best in the 200 meter butterfly with a time of 2:01.14, and finishing 35th in the event. Chris was the 88th fastest qualifier in the nation going into the meet, based on a time of 2:01.62 that he posted in the summer of 2014 while competing at Junior Nationals, thereby being another TNT swimmer who achieved the qualifying time standard prior to entering college. The half second improvement in his 200 meter butterfly at a swim meet where only 20% of the athletes improve their times when considering the meet in its entirety, has an impact of moving up 53 places. Chris began his Junior National/National experience at the age of 16 when he competed in the summer at the 2012 Junior National meet. Chris’s earliest 200 meter butterfly time posted with the team is from the May Day Classic in May of 2008 where he swam a time of 2:54.37 at age 11. Eight years later, and 53 seconds faster, Chris is competing at Olympic Trials, and finished a mere 19 places from a semi-final swim. Chris has completed his second year competing for the University of Santa Barbara, under the guidance of Matt Macedo and Gregg Wilson. 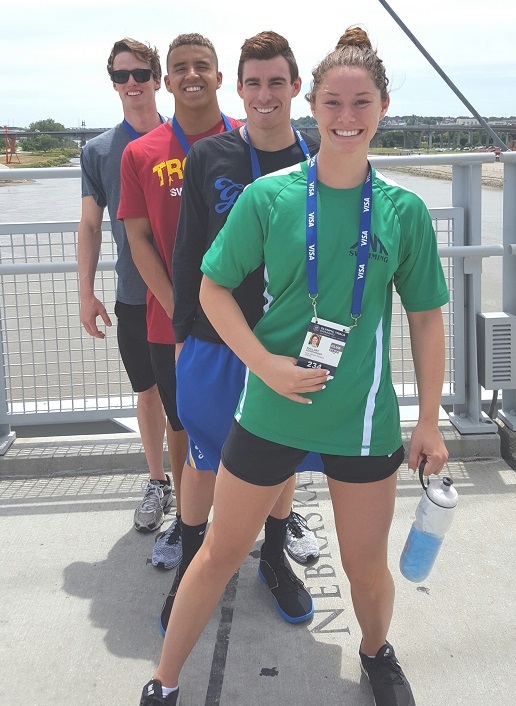