Three team records are set by four individuals (one who still remains unattached). The most established of the three records broken was that of the 50 yard freestyle event for the 13-14 year old boys. Fourteen year old Colin Landweer swims a 23.15 to break the existing team record by over two tenths of a second belonging to Josh Tabers (23.36) that was set at the Winter Invitational meet two years ago in December of 2007.

Eleven year old Khloe McCarthy battled with soon to be teammate Brianna Fleeman in the 1650 yard freestyle. Both swimmers swam faster than the existing team record set last month by Mallory Korenwinder while at the Hanford meet. Furthermore both Khloes 20:56.66 and Briannas 20:57.28 were fast enough to qualify for Arizona, and they did so while also qualifying for Arizona in the 1000 on the way to the 1650 yard freestyle cut. Khloes 20:56.66 becomes the new team record.

Fourteen year old Nathan Rhea is the remaining individual who had established a new team record while at the meet. Nathan improves his 100 yard breaststroke to a 1:03.28 to break his own team record that was set at the Tulare meet in February of this year.

TNT swimmers had left this Merced meet with much hardware. High Point awards included trophies for the top three point getters in each age group.

Preston Niayesh goes undefeated for first place High Point in the 7-8 boys division (80), while Nathan Rhea in the 13-14 boys division (76) and Kaleigh Botill in the 17-18 girls division (52) became the only other two TNT swimmers to swim away with the top honors of High Point. 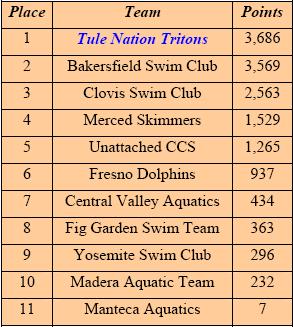 The overall team improvement percentage was 63%, well over the 50% that would be considered a successful meet. Twelve of our 42 who had previously recorded times on the team in events 50 yards or longer improved all events that they swam. These 12 included: Bre Abell, Tristian Abell, Connor Allison, Kaleigh Botill, Thomas Brown, Crista Droney, Madison Ekizian, Chris Hansen, Makayla Jordan, Colin Landweer, Makenna Mason and Ira Porchia.