Twelve TNT swimmers traveled to Chula Vista, California to represent Central California Swimming at the 2010 Central California Swimming  Sierra Nevada  San Diego Imperial Tri-meet held over the January 23-24 weekend. With 27 points from individual events, Katelyn Herrera led the TNT swimmers in the contribution of points for the CCS team. Her time of 2:30.37 in the 200 fly was high enough for a 4th place finish, which along with Christopher Nolans 4th place finish in the 100 breaststroke, was also the highest individual place finish by a TNT swimmer. Katelyn also broke the 11-12 girls team record in the 200 butterfly that was set at Vacaville in 2002 by Joclyn Ford. Katelyn swam two new Far Western cuts in the 200 fly and 200 IM events. She joins Kyle Grissom and Christopher Nolan as other TNT All Star swimmers who have qualified for Far Westerns. 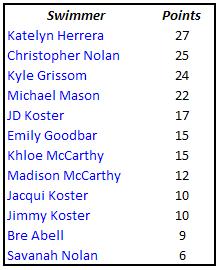 Michael Mason led all TNT swimmers in improvement percentages as he improves all five of the events he is entered in. Michael is the sole individual with a 100% improvement. Michael is followed by Savanah Nolan who improved 80% of her times. Other TNT swimmers who improved 50% or more of their times included: Katelyn Herrera (67%), JD Koster (50%), Madison McCarthy (50%) and Christopher Nolan (50%).