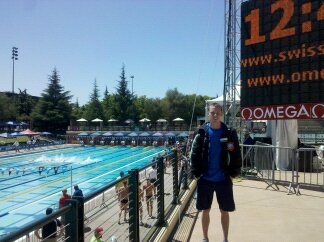 For a swimmer who had not qualified for the Speedo Grand Challenge in late May because his 200 fly time was only a 2:21.95 at the Bakersfield meet during the first weekend of May, Wesley Coles had certainly trained and performed with intent that appeared to serve as a seemingly inexhaustible fuel source.

Wesley began his significant descent (swimming times that would put him close to a Junior National cut) during the LA Invite where he improved his Speedo Grand Challenge time from a 2:12.86 (performed in late May) to a 2:09.53 in mid-July. The LA Invite at USC took place only one week into the taper for Sectionals scheduled one week after LA Invite. Despite the fluke preliminary swim at Sectionals the next weekend, Wesley dropped to a 2:07.91 to make his Junior National cut. He wasnt done.

Good luck, Wesley, in qualifying for Nationals (or Olympic Trials) next year. You are now well within range.