Five TNT swimmers competed at the Swimvitational meet that was held in the Olympic Trial pool at Omaha, Nebraska. The meet is intended for those operating the Olympic Trials the opportunity to fine tune any management adjustments necessary in advance of running the actual Olympic Trials. This also gives athletes a late opportunity to qualify for Trials, or an opportunity for athletes such as Matt Grievers and Amanda Beard, a tune-up for what will be their focus meet in a matter of weeks.

Swimming back-to-back weekends, our five who attended the Santa Clara International, flew to Omaha for the experience. Four of our swimmers earned a second swim with Chris Nolan as our highest finisher in the 200 fly event with a time of 2:06.30 which was one one-hudreth of a second off of the summer Junior National time standard. Tule Nation Tritons doubled up in the championship final heat for the event with Chriss 6th place finish followed by Wesley Coles 8th place finish after an impressive 2:08.83 swum in the preliminary heats. 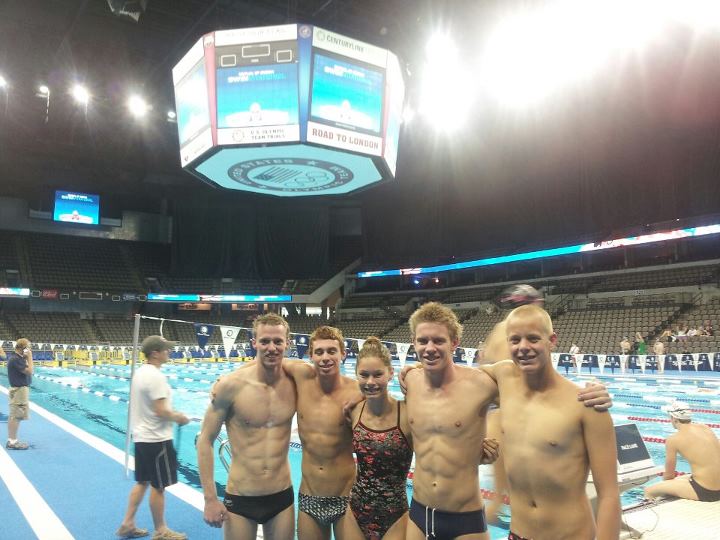 Three individual team records were established at the meet, two of which belonged to Mallory Korenwinder. Mallory set the team record at the Santa Clara International meet with a time of 2:46.53 the weekend prior to Omaha, and while at Omaha she finished 41st in the 200 breaststroke with a time of 2:45.62. The time stands as the 38th fastest time in the nation for all 14-year old girls. Her time of 1:15.27 also outperformed her swim at Santa Clara where her time of 1:15.72 was also a team record. Her Omaha time currently stands as the 21st ranked time nationally.

Chris Nolan came away with the only other individual team record, and he did so by also improving his Santa Clara time in the 200 fly event. Wesley Coles had set the team record at Junior Nationals last summer as a 2:07.05, and although Chris missed the record during both prelim and final swims at Santa Clara and missed it during his prelim swim in Omaha, he was under the record during the championship final heat in Omaha. His time of 2:06.30 now stands as the 16th fastest time nationally for all 16 year olds. Chris Nolan turned 16 only one week prior to the Omaha meet.