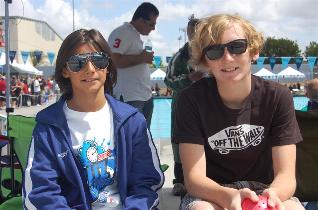 Five TNT swimmers competed at the Speedo Grand Challenge which typically is host to collegiate athletes across the nation. Primarily attended by USC swimmers, this years event provided swimmers age 5 to 12 the opportunity to compete if they had achieved the challenging minimum time standard. Two younger TNT swimmers qualified and attended the meet. Parker Giles (age 12) and Preston Niayesh (age 11) proved to be among two of our premier age group swimmers by qualifying. Swimmers of all ages are to be commended for achieving the minimum time standard, regardless of whether they are an age group swimmer or senior swimmer. 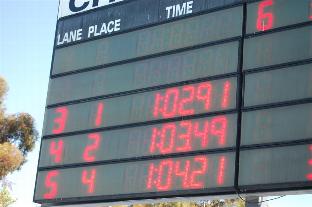 Parker Giles competed in three events and swam to a third place finish in the 50 meter butterfly. After swimming a life-time best in the preliminary heats with a 31.21, he then improved that time to a 30.88 in the final heat. The close race among the top three finishers is reflected well in the top three times: 30.01 for first place, 30.84 for second place and Parkers 30.88 for third place. His 29.74 in the 50 meter freestyle event was fast enough for a first alternate position (9th place). Swimmers of age 5-12 were limited to one heat in finals. The only team record set at the meet also came from Parker Giles, who competed in the 100 meter freestyle, and finished in 12th place with a time of 1:04.83. The previous record of 1:05.13 was held by Jason Hernandez and was set at Junior Olympics in 1992. Parkers new record currently stands as the 37th fastest time in the nation for all 12-year old boys.

Most of our swimmers competed in three events, and our swimmers also included 15-year old Josh Avila who had his highest place of 72nd in the 200 meter breaststroke event. Preston Niayeshs highest finish was 11th in the 50 meter breaststroke, while 17-year old Cameron Weas, training in Hanford, finished 151st in the 50 free. Cameron became our only swimmer to maintain a 100% improvement rate. Bobby Yribarren finished 54th in the 1500 freestyle.