Two years ago TNT had no swimmers entered into the Santa Clara International meet, for the first time in several years. Last year trailblazers Colin Landweer and Nathan Rhea qualified and competed at the meet to become the first two of a new cohort. Five swimmers competed at the meet this year, and includedWesley Coles, Mallory Korenwinder, Colin Landweer Chris Nolan and Nathan Rhea.  Chris Nolan became the only individual with a second swim, and he did so in the 200 meter butterfly event with a time of 2:07.25 and a 7th place finish in the bonus heat, which was the 25th fastest time swam at the meet in the event that fielded 9 swimmers in each of three final heats. 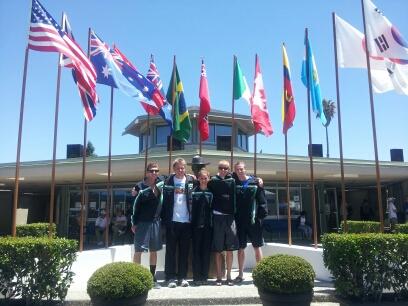 Our four male swimmers teamed up for three relays, the highlight being the 800 freestyle relay where an opportunity presented itself that placed our team into lane 5 which is commonly reserved for the fastest team entered into the event. Our sixth place performance by Wesley Coles, Chris Nolan, Colin Landweer and Nathan Rhea in the event was attained while competing with the Japan National Team to the left in lane 6 and the Australian National Team to the right in lane 3 in the 9-lane pool where lane 5 would be the fastest seed. Our team posted a time of 8:06.68 which broke both the 15-18 team record of 8:22.97 that was set by Wesley Coles, Nathan Rhea, Sam Hansen and Colin Landweer at Junior Olympics last year. 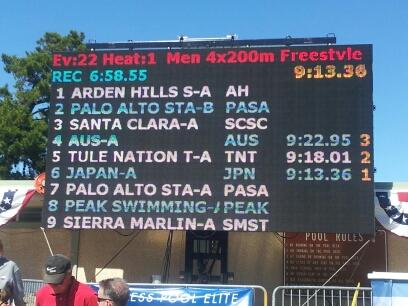