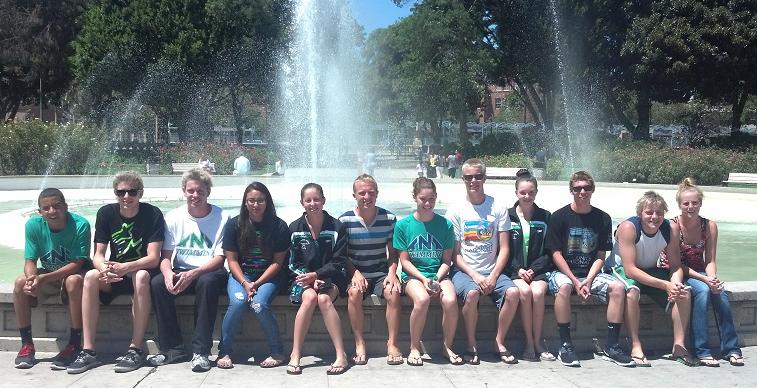 Thirteen TNT swimmers traveled to USC over the second weekend of July to compete at the Los Angeles Invitational. Fourteen-year old Mallory Korenwinder was one of our two championship finalist and was our top finisher placing 5th in the 100 meter breaststroke among a field led by USC Trojan Andrea Kropp who, at the Olympic Trials, was an 11th place finisher during the semifinals in the 100 breaststroke, and a 3rd place finisher in finals in the 200 breaststroke. The field of athletes had absolutely no impact on deterring the focus of Mallorys race as she hit the water with clear intent for a top 3 finish to make the platform award presentation. Mallory qualified for the championship heat in 6th place, positioning her as the second fastest non-Junior National qualifier in the heat. Knowing her pattern as a strong finisher, hitting the first wall in fifth place with a split of 35.21 was a good indicator suggesting that she would move up in the heat, and finish with a time faster than both the winter and summer Junior National time standard. Her finish time of 1:13.77 for the 100 meter breaststroke event was under both Junior National time standards, as well as under the Winter National time standard. The time currently stands as the 13th fastest time in the nation for all 14-year old girls. Mallory was a consolation finalist in the 200 breaststroke where her time of 2:44.40 was fast enough for a 15th place finish after going in 16th. Both events are new team records for Mallory, and her 200 breaststroke currently ranks 34th in the nation.

Seven of our 13 swimmers earned second swims while at the meet. Our other championship finalist swim came from Chris Nolan who moved from 8th to 7th with his time of 2:06.37 in the 200 meter butterfly event. The time is a mere eight one-hundredths of a second away from the summer Junior National time standard. Chris also had a bonus final in the 100 fly event after swimming a time of 59.32 in the preliminary heats. His consistent performance of 59.38 was fast enough for a 23rd place finish in the event.

A consolation final (top 16) was also earned on day 2 of the meet where Emily Goodbar tackled arguably the most challenging single-day schedule even when not considering earning second swims in each event. Emily swam to the A-consolation final in the 200 fly after posting a new team record with her time of 2:23.17 in the preliminary heats. She followed that event in both the preliminary heats and in the final heats of that day with the 400 IM, one of the toughest doubles to experience. Nevertheless, her preliminary time of 5:16.24 was not only a new team record, but also fast enough for a bonus final, placing her as the 20th fastest swimmer at the meet going into finals. Her 200 fly is currently the 47th fastest time in the nation, while her 400 IM ranks 156th. Emily also set a new team record in the 100 fly with a time of 1:07.21, and that time ranks 198th nationally.

Three additional swimmers earned second swims at the meet. Our sprinter Colin Landweer earned his second swim in the bonus final finishing 20th in the 50 meter freestyle event where the average age of the championship finalist was over 21 years. Colins time of 25.28 was a mere .36 seconds behind the winner of the bonus heat. Sam Hansen, returning after completing his first year of collegiate competition at Canisius College in Buffalo, New York, earned a second swim in the 200 breaststroke where his 22nd place finish was one place behind teammate Nathan Rhea in the event. Kloe McCarthy earned a second swim in the 200 meter breaststroke after swimming her life-time best, coming from the slowest of the preliminary heats where her time of 2:52.37 outperformed the field by a margin large enough to place her into the bonus finals.

Congratulations to Josh Avila, Allyson Duffy, Kyle Grissom, Katelyn Herrera, Khloe McCarthy, Matt Tashima and Cameron Weas for qualifying for and attending their first LA Invite meet. The following list reflects the highest place event for each of our swimmers: 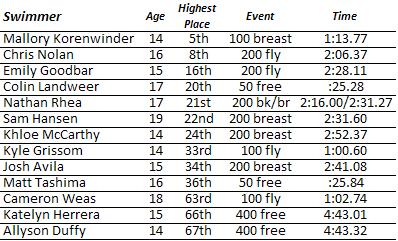