After a strong second day of Sectionals, multiple finalists of Tule Nation Tritons resulted in the team scoring enough points in individual events to place the team in a tie for first place for the small-team division. Fourteen year old Mallory Korenwinder led the team with dual championship final swims highlighted by a second place finish in the 100 meter breaststroke event with a time of 1:12.21 which is two one-hundredths of a second (.02) off of this past Olympic Trial time standard. Her performance not only stands as a new team record, but also breaks the Central California Swimming record that was established as a 1:13.23 in 1993. The time currently ranks as the 6th fastest time for any 14-year old girl in the nation. Her second championship final swim came in the 200 breaststroke where her new team record of 2:39.28 was enough for a 6th place finish in the event. That time currently ranks 14th nationally. 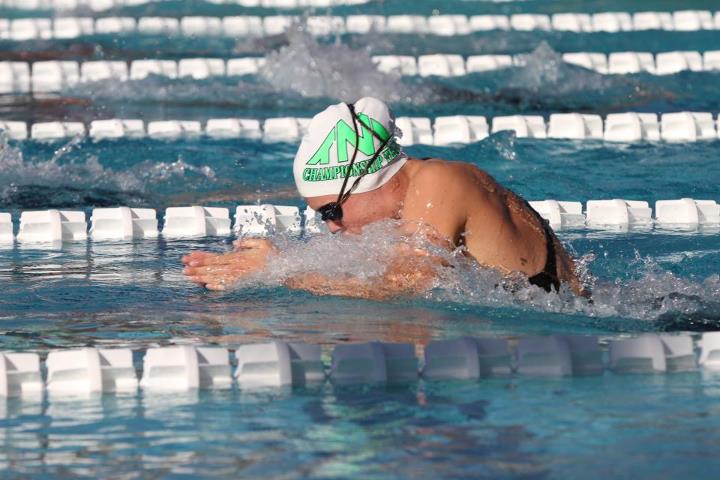 Two of our swimmers also advanced to the consolation final (places 9-16), and both swims resulted in newly established team records. Sam Hansen returned from completing his first collegiate year at D-1 Canisius College in Buffalo, New York to win the consolation heat in the 200 breaststroke with a time of 2:24.99. This is currently the 49th fastest time in the nation for all 19-year old male swimmers. Sam also earned a second swim by advancing to the D final in the 100 breaststroke with a time of 1:08.24 earning him a 27th place finish there.

Chris Nolan was our only other swimmer who advanced to the B final, and he did so in the 200 meter butterfly event with a time of 2:05.46. This new team record currently stands as the 20th fastest time in the nation for all 16-year old male swimmers, and the fastest time in the consolation heat. His time also allows him to join Mallory Korenwinder as they attend the summer Junior Nationals in Indianapolis, a swim meet that takes place the week of August 13-17.

Attending her first Sectional meet, and entering the meet with only a yard qualifying time, fifteen year old Laruen Davis of Fig Garden earned a second swim in the 200 breaststroke event while competing in the preliminary heats from the B-session.  The commanding lead over the field that her preliminary time of 2:45.55 presented was a strong indication of a potential second swim that materialized. Her time became a new team record as she swam well below the existing record of 2:52.49 set by Joclyn Ford at Junior Olympics in 2005. Laurens time currently stands as the 94th fastest time in the nation. She had also set a new team record in the 100 breaststroke event with a time of 1:18.15, and this time ranks 159th nationally.

Nathan Rhea was our only remaining swimmer to earn a second swim, and he did so in the 400 IM event. His time of 4:43.17 was fast enough for a 27th place finish, and was his second fastest time on record. Congratulations to all sixteen swimmers who qualified and competed at Sectionals. The following list reflects our remaining swimmers and their highest placed event: 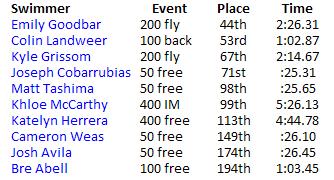 Besides Lauren Davis, Sam Hansen, Mallory Korenwinder, and Chris Nolan, two additional swimmers set new team records while at Sectionals. After setting two records at the LA Invite that took place just two weeks earlier, one of them being in the 100 fly, Emily Goodbar of Selma improved her 100 fly again, this time to a 1:06.90. The time gave her a 60th place finish at the meet, and currently ranks 216th nationally for all 15-year old girls.

Kyle Grissom, competing at Sectionals while only 14 years old, improved two of his pre-existing team records that he had set while competing at the Age Group Invitational last month. Kyle swam 2:14.67 in the 200 fly which places him as the 50th fastest 14-year old male swimmer in the nation for the event. His 25.89 in the 50 free stands as the 89th fastest time nationally. 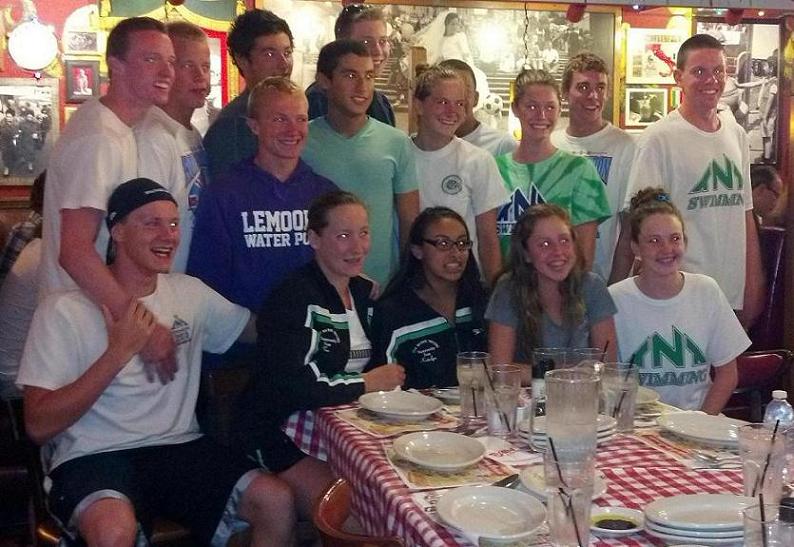 The team improvement percentage was 51% with nine of our sixteen swimmers improving 50% or more of their events. An improvement rate of 50% or higher is considered very respectable for senior-level athletes, and our rate was led by Joseph Cobarrubias and Matt Tashima who improved 100% of times that had been previously recorded with the team. Those who improved 50% or more of their times included: Wes Coles (83%), Mallory Korenwinder (83%), Josh Avila (67%), Lauren Davis (67%), Emily Goodbar (60%), Sam Hansen (50%) and Colin Landweer (50%)