A total of 108 TNT swimmers entered into the Hanford Fall Classic which was the first scheduled short course meet of the new season, and only one swimmer came away with a team record. Ten year old Skylar Ford training in Visalia had established herself as our top 10-under girl of all time in the 50 meter freestyle event by swimming the top four times during the long course season, as well as holding the top three times in the 100 meter freestyle, and top two times in the 50 meter fly event. She now begins her short course season with an early record-breaking performance at the Hanford meet, posting the fastest time on record in the 50 yard event with a time of 28.50 thereby surpassing Melissa Lindleys team record of 28.87 that was set at Far Westerns in 1990. This becomes her first short course record of surely several to come. With the advent of the new reporting cycle that began at the beginning of the month, Skylars time currently stands as the 3rd fastest time in the nation. Skylar swam undefeated at the meet, winning all five events entered.

Only two other swimmers were undefeated at the meet, and its not the first time that 8-year old Ian Belflower training in Bakersfield swam uncontested. Our other undefeated swimmer was 12-year old Satoshi Shinkawa of Selma who also came home with four first place finishes with improvements that included an over 14-second drop in the 100 fly. Besides Skylar, Ian and Satoshi, we had 45 additional event champions in each respective time category (A, B, C). The following table reflects these 45 additional swimmers along with the number of individual events they won: 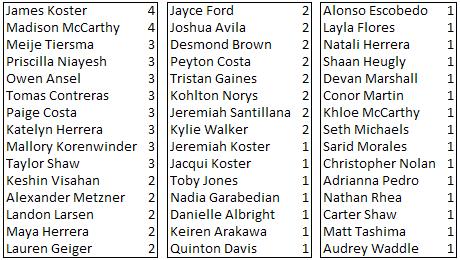 Thirty-eight of our swimmers recorded times in 50-yard events or longer for the first time with the team, while 65 swimmers entered 50-yeard or longer events that had been previously attempted. Of those who maintained previously recorded times, the teams time improvement was an astounding 71% with 31 swimmers improving 100% of their times. Congratulations to the following 31 swimmers for their perfect improvement rate as we enter the new short course season: