Sixteen TNT swimmers competed at the Summer Age Group Invitational hosted in Ventura by the Buena Ventura team over the last weekend of June, and with the small group, accomplishments were multifaceted, and nearly too many to fathom. To begin, nine-year old Kylie Walker became our only event champion, and she did so in the 50 meter fly event while still on the bottom of the 9-10 age division. Her time is the fourth fastest in the 9-10 age division for the event when considering all three Age Group Invitational meets combined that took place throughout Southern California Swimming over the weekend. Her swim of 34.44 is over a half second under her pre-existing team record that she set at the Clovis meet the previous month, and her time stands as the third fastest in the nation for all girls at age nine. The top nine-year old time in the nation of 34.13 was interestingly established during the same weekend at the Age Group Invitational meet hosted by NOVA in Irvine within Southern California as that nine-year old also won the event at that meet.

Two additional team records were set by Preston Niayesh who already owned both the 50 meter and 200 meter breaststroke events for the 11-12 boys division. He had set the 50 mark at the Speedo Grand Challenge meet the previous month as a 37.54, and his 37.47 from the Age Group Invitational now stands as the 115th fastest time nationally for boys of age 12. His 3:01.51 topped his previous 200 breaststroke record of 3:03.15 that he swam at Santa Clarita last May, and that time ranks 139th among 12-year old boys.

Several of our 10-under boys made their first Far Western qualifying times, and although nine-year old Peyton Costa will be a returning contender, he may be joined by ten-year old Tomas Contreras and nine-year old Toby Jones who made their first cuts at the Age Group Invitational. Owen Ansel came away with his first Speedo Grand Challenge cut on the senior-swimming side. One of the more challenging time standards to achieve at the senior level was obtained by Kyle Grissom who made his first Junior National time standard in the 100 meter fly with a time of 56.71. He qualifies for both the winter and the summer Junior National meets. The summer meet is held in Irvine later this summer, while the winter meet will take place in Greensboro, North Carolina in December. Kyle joins Mallory Korenwinder and Chris Nolan as our current Junior National qualifiers. 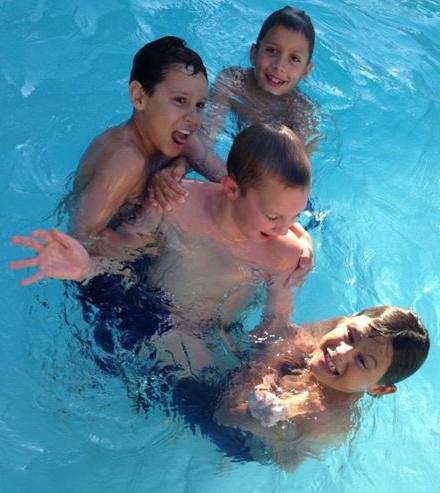 Finally, our 10-under girls of Priscilla Niayesh, Danielle Albright, Kylie Walker and Maya Herrera not only became the event champions, but are also the owners of the 10-under girls CCS Record for the 200 medley relay. The pre-existing record was set by Clovis as a 2:30.68 in 2011. Our 10-under girl’s time of 2:28.25 is the fastest time in the history of Central California Swimming, and is currently the fourth fastest nationally for 10-under girls. The top two national times were established at the Age Group Invitational hosted by Irvine NOVA over the same weekend.

The 2013 TNT Summer Age Group Invitational team of 16 was small, yet very powerful, and they undoubtedly had set the stage for what’s to come this summer.