The first North-South split meet took place at the Selma pool over the last weekend of September, and 86 TNT swimmers competed in the meet to maintain an astounding 63% team improvement rate during the second short course meet of the season.

Although it’s an early meet in the season, four team records were still set by two swimmers. Ten year old Danielle Albright broke the team record with her time of 2:34.85 in the 200 IM – a record that was set by Mallory Korenwinder four years ago as a 2:35.99 at Far Westerns. Danielle’s time is the 7th fastest swam since the beginning of the month by any 10-year old girl in the nation. The current top time is 2:30.17 set by a Florida swimmer. The 100 IM record was also reset by Danielle. Her time of 1:11.07 is the seventh fastest time posted since the beginning of September and is an improvement on Skylar Ford’s record of 1:11.77 that was set at JO’s earlier in February of this year.

Fifteen year old Mallory Korenwinder came home with the two breaststroke records, beginning with the 100 breaststroke. Her time of 1:07.66 was her first 15-over short course swim at a club meet, and her time is under Jordan Morillo’s 1:08.95 record set at the Clovis Senior Q meet in 2010. Although not her best time, it still stands as the fastest time posted nationally prior to the weekend in a recording period that begins this month. The breaststroker that she is, Mallory also posted the current top national time in the 200 breaststroke for the month with a time of 2:25.07 – a time that is under Lauren Davis’s previous record of 2:26.94 set at Sectionals last December. 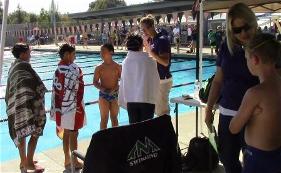 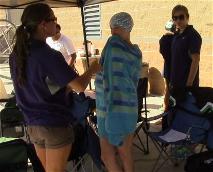