USA Swimming annually recognizes individuals as Scholastic All America swimmers if they have been successful both in the classroom and in the swimming pool. This year, Central California Swimming lists four individuals who have met the minimum requirements, and three of them are TNT swimmers. Scholastic requirements include a minimum grade point average of a 3.5 during their sophomore year, while at the same time attaining a challenging time standard. 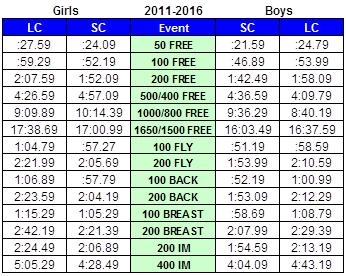 Entering his first year competing for the University of the Pacific, Nathan Rhea had been known as one of the top graduates in his class from Tulare Western this past year. Nathan is one of a few who qualified for the Scholastic All America status his sophomore year, and remained there for all of the three consecutive years. He had already been recognized as the California Interscholastic Federation (CIF) Scholar-athlete Section winner for the entire Central Section which is one of ten sections throughout the entire state of California. Nathan was one of only nineteen recognized Scholar-athletes among all athletes throughout the state. The list of nineteen students can be seen in The CIF News, September 2013 issue.

Current Corcoran High School Senior, Chris Nolan, obtained the All-America status his sophomore year, and now once again receives the recognition following his junior year of high school. Chris is a repeat Junior National qualifier whose performance at this past winter Junior National meet resulted in a first alternate finish. He is currently scheduling recruiting trips to colleges such as Wyoming, Utah, and UC Santa Barbara.

Our final All-America recipient is Kyle Grissom who is in his third year at Porterville High School, after his academic performance during his sophomore year qualified him for eligibility onto the selective list of academic scholars. Kyle competed at his first Junior Nationals this past summer, and has already received inquiries from Division 1 programs. He is scheduled to compete at this upcoming winter Junior Nationals to be held in Greensboro, North Carolina.

The application deadline is typically near the end of August for those who intend to apply this next year. Please ask your coach or Phil for any needed details.