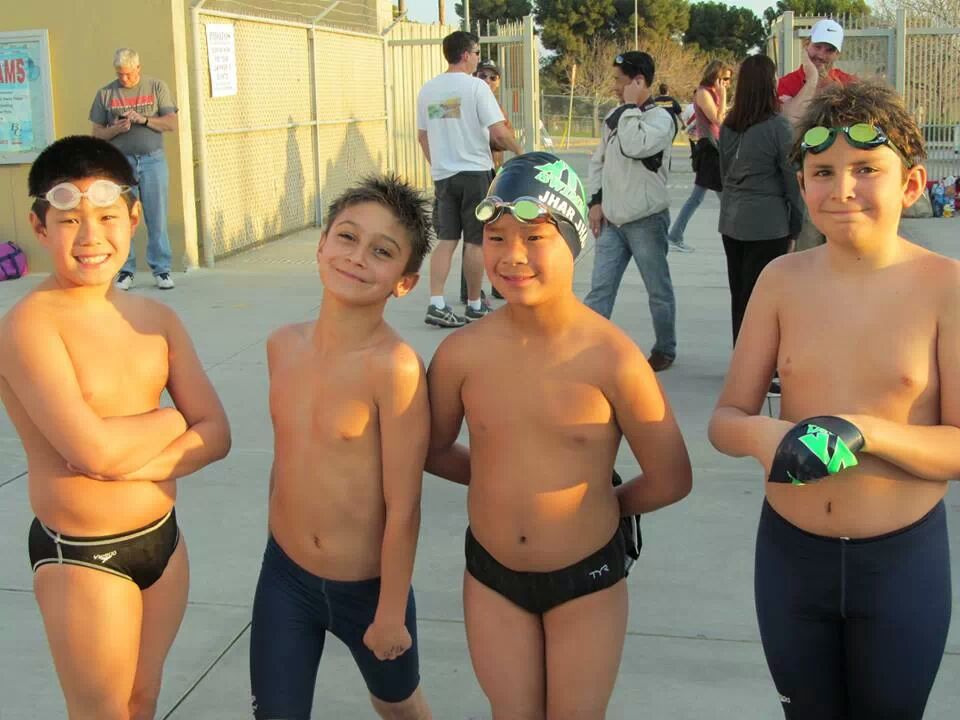 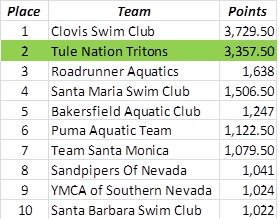 Our total team points from individual events was led by 10-year old Visalia swimmer Kylie Walker whose 134 points resulted from five first place finishes and two second place finishes. Kylie was one of only two TNT swimmers to win an event, and was also our team’s only High Point recipient, outscoring all 10-under girls at the meet. Her performance resulted in resetting five team records beginning with the 100 fly where she improved her own team record that was set as a 1:07.77 while competing at the All Star meet last month. She improved her time by over a full second to a 1:05.99, and swimming a time that places her among the top 10 swimmers in the nation to date. Kylie proceeded to break her preexisting 100 IM team record that she set at the Tulare meet last October as a 1:10.37 with a 1:10.14 that moves her to the 64th position nationally in that event. Her third team record was in the 50 free, and is a new one for her, set by Skylar Ford at the Selma meet in 2012 as a 27.56. Kylie’s new record of 27.54 stands as the 40th fastest nationally for girls of age 10. Skylar also held the 100 freestyle team record that she set as a 1:00.99 at the Winter Age Group Invitational in 2012, and Kylie’s JO swim of 1:00.78 slid under that time, and becomes the 50th fastest nationally. Kylie rounded out the meet improving her time, and therefore team record, in the 50 fly event from a 29.41 that she swam in San Diego earlier to a 29.31, placing her among the top six nationally.

Forty-seven of our 65 swimmers scored at the meet:

Tule Nation Tritons fielded 52 relays, and 46 of those scored, contributing 1,500 points toward the overall team score. Three CCS Records were established by two distinct relays by the 15-16 year old girls at Junior Olympics. The team of Khloe McCarthy, Mallory Korenwinder, Emily Goodbar and Sierra Jett set the Team, 15-16 CCS and Senior CCS relay records with a time of 1:51.21 in the 200 Medley relay. The TNT team of Khloe McCarthy, Morgan Coddington, Sierra Jett and Katelyn Herrera had set the CCS Record in December as a 1:53.98, and the Senior CCS Record was set in 1996 by Clovis as a 1:52.41. Our same team set the CCS 15-16 Record in the 400 Medley Relay with a time of 3:58.87, going under the preexisting record of 4:10.42 that our team of Khloe McCarthy, Morgan Coddington, Sierra Jett and Jillian Hatch had set in December at the Winter Invitational. 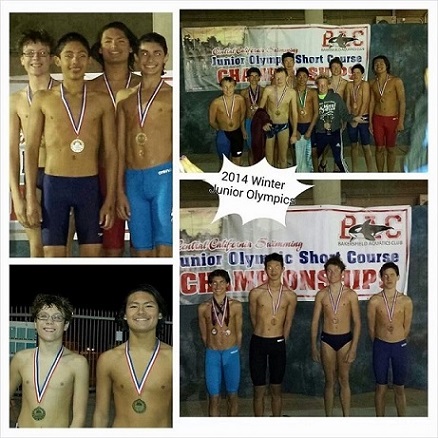 Team relay records were also set in the 13-14 boys 200 Medley Relay with a time of 1:51.88 by Alonso Escobedo, Preston Niayesh, Satoshi Shinkawa and Blake Wong. Justin Warner, Jimmy Koster, Luke Dignan and Justin Bos had set the record as a 1:52.50 at last year’s Junior Olympics. The same team, with Quinton Davis replacing Blake Wong, set the team record in the 400 Medley Relay with their time of 4:02.42, going under the 4:11.21 set last year by Owen Ansel, Noah Haworth, Kyle Grissom and Jeremiah Santillana. Our 10-under boys of Benjamin Wheeler, Toby Jones, Tomas Contreras and Peyton Costa reset the 200 Medley Relay team record with their time of 2:16.48, going well under the 2:21.35 record set by Parker Giles, Dax Korenwinder, Jonas Huckabay and Micah Ruiz at JO’s in 2010. The same team also set the team 200 freestyle relay record with their time of 2:01.17 going under the 2:02.17 record set in 2011 by Dax Korenwinder, JD Koster, Jonus Huckabay and Preston Niayesh. Two 15-18 team freestyle relay records were also reestablished, beginning with the 1:40.50 that resulted from the team of Mallory Korenwinder, Khloe McCarthy, Bre Abell and Sierra Jett in the 200 free relay. This time was under the Winter Invite swim of 1:41.76 by Sierra Jett, Khloe McCarthy, Katelyn Herrra and Jillian Hatch this past December. Mallory, Bre, Sierra and Jillian Hatch swam a 3:36.22 in the 400 free relay which is under the Winter Invite time of 3:44.82 posted by Emily Goodbar, Sierra Jett, Khloe McCarthy and Jillian Hatch.