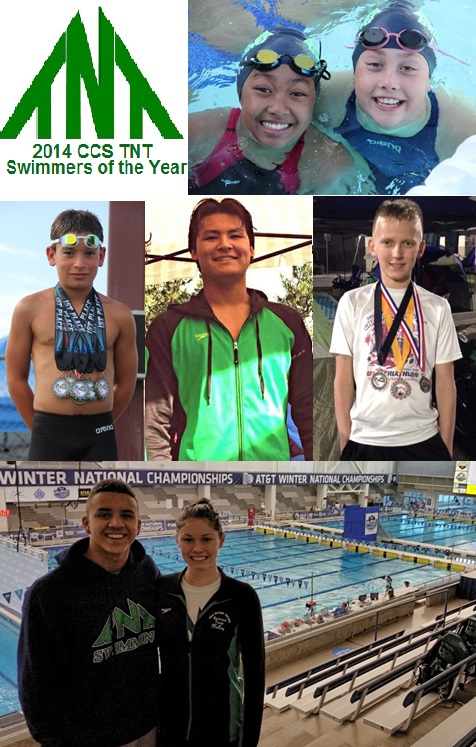 Central California Swimming recently recognized swimmers as Swimmer of the Year recipients within 20 age divisions, not including the alumni division, and TNT swimmers claimed 7 of them. Swimmer of the Year recognition is based on prior year performance, and recognition took place at Junior Olympics for 12-under swimmers, and at the Juanita Allington meet for 13-over swimmers.

Peyton Costa was recognized as the 10-year old male Swimmer of the Year, after being the 9-year old recipient last year. He is a Western Zone finalist this past summer while competing in Seattle. Setting eight short course team records, he has the vast majority of the 10-under boy team records, leaving only four untouched, placing him as one of our all-time top 10-under male short course swimmers in the history of the team. He already holds the 11-12 200 backstroke record. Additionally, Peyton holds two long course team records in the 10-under division.

Jackson Huckabay of Selma followed last year’s recognition as the 10-year old male Swimmer of the Year with this year’s 11-year old recognition. Jackson is a multi-finalist at the June Age Group Invitational year after year, and was a Western Zone finalist during the 10-under age group for the 200 free, 50 breast, 100 free, 100 breast and 50 free events. He currently holds the team’s 11-12 1000 yard freestyle team record, and he maintains most of the team’s 10-under boy long course records setting five of the eleven, thereby placing him as our team’s long course standout for the 10-under boys.

Satoshi Shikawa of Selma received his first Swimmer of the Year award this spring for the 13-year old male division. Satoshi is a Far Western, and Western Zone qualifier, and has recently achieved his first cut for the Terrapin meet as he begins his transition to senior-level swimming. Satoshi is our current 11-12 boys 100 IM team record holder, and is a multi-Winter Age Group Championship finalist.

Mallory Korenwinder is the recipient for the 16-year old female division, and her track record includes national rankings in three different age divisions, along with CCS records in the 100 yard, 100 meter and 200 yard breaststroke events. She is a USA Swimming Summer National qualifier, and a Winter Junior National championship finalist. She holds 16 short course team records that span all four age divisions, and 11 long course team records.

Kyle Grissom was the recipient for the 16-year old male division, and he is a recent signee to the USC swimming squad. Kyle had set the CCS record in both 100 yard and 100 meter butterfly events this past year, has been nationally ranked (top 10) in two different age divisions. He is a Winter National qualifier who holds fifteen team records across three different age groups.