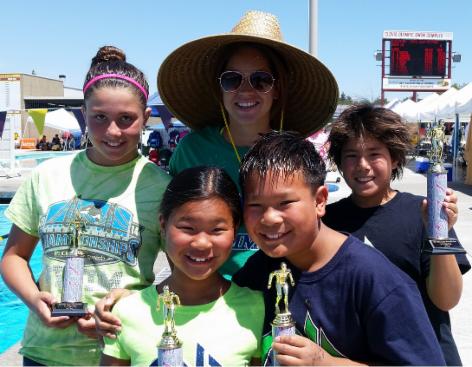 Gage Price was one of only a handful of our 57 swimmers who competed at the Mike Snyder Memorial meet during the last weekend of May who came away as an event champion, but Gage stood well apart in being the only swimmer to be undefeated at the meet, winning all eight of his events in the 9-10 boys division. He led our six high point winners of the meet by being the only one to take home the top honors, and outscoring the next contender by 30 points. Bryan Wong was in a tied position for the second place for high point in that age division, and he accomplished this by winning two of his six events at the meet. Other second place high point recipients included Alexa Wong whose three wins placed her five points behind the leader in the 8-under division, and Danielle Albright whose three wins also was five points behind in the 11-12 girls division. Preston Niayesh was a two-time champion, and was a third place high point finisher, while Alex Roberts and Mallory Korenwinder finished up in fourth place for high point.

Another highlight of the meet was the 50 meter freestyle swim of 13-year old Mackenzie Garza from Visalia during the lead-off of the 200 free relay. Her time of 29.07 is a new qualifying time for the LA Invitational, a meet that plays host to teams like USC, Cal Berkley, Stanford, as well as international programs. Mackenzie will join 15 other swimmers from our team who have made the qualifying time for this senior-level meet, including training partner Megan Ridenour, who was our other event champion, winning both the 100 and 200 breaststroke event for the 13-14 division. Megan recently returned from the Speedo Grand Challenge, where at age 14 was our teams highest finisher in the 13-over division.