Six TNT swimmers competed at NOVA Grand Challenge alongside the likes of Jessica Hardy, Simone Manuel, Elizabeth Pelton, and Caitlin Leverenz on the female side, as well as male Olympians such like Vlad Morozov, and David Nolan (known to be the first individual to swim under the 1:40 barrier in the 200 yard IM by breaking Ryan Lochte’s American Record of 1:40.08). Swimmers competing at the meet represented schools such as Cal Berkeley, Stanford and USC.

Our 12—year old girls dominated the outcome performance, each of the two improving 100% of their times, and setting a new team record each. Danielle Albright made her second appearance at the meet in the 12-under division, and set a team record in the 200 IM after finishing 7th with a time of 2:36.08, and swimming twice under the preexisting record of 2:39.30 that was set by Megan Eppler at the Clovis meet back in May of 2004. Danielle’s time stands as the 39th fastest in the nation for any 12-year old girl at this point in time. Danielle swam three events at the meet, and earned a championship final spot in all three. Her highest place was 2nd in the 100 breaststroke (1:21.52), and she followed that place with a bronze medal performance in the 50 breaststroke (37.74) event. The other 100% improvement from the 12-under division came from Alex Roberts who competed in her first Speedo Grand Challenge meet, and she too earned the right to compete in the championship final in all three events. Alex set a new team record in the 50 fly with a time of 31.45, and the time set her as the fourth place finisher in the event. The record was one of the longest standing times in the books, set back at the 1989 Western Zone meet by Lynnie North as a 31.71. Alex’s time stands as the 390th fastest nationally for females of age 12. Alex also earned a 5th place finish in the 100 back (1:14.21) and a 7th place finish in the 50 back (34.41).

Our top performer in the 13-over division was Visalia’s Megan Ridenour who also made her first appearance at the meet, and at only 14 years of age. Megan was the only other individual to improve 100% of times, and she also had the next highest finish of 34th in the 100 breaststroke event (1:17.74), when all swimmers, including Jessica Hardy, are combined into the results. 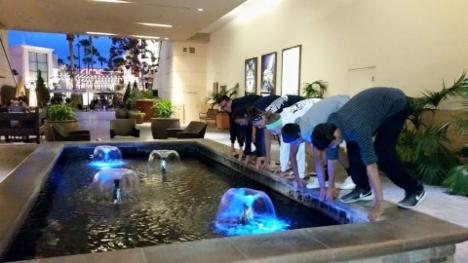