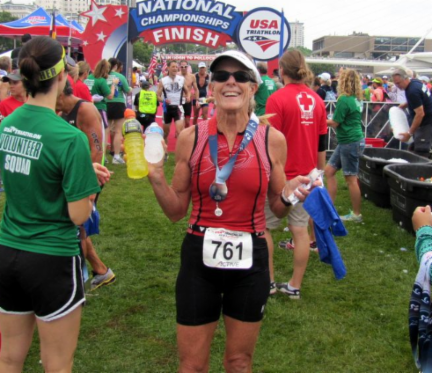 While our swimmers were competing at the USA Swimming Nationals in San Antonio, Texas, Missy Lestrange was among the 2,600 triathletes that competed at the 2015 Olympic Distance Age Group Triathlon Nationals over the August 8-9 weekend, placing third in her age group that consisted of 70 competitors, and only six minutes behind leader, Karen Mckeachie of Ann Arbor Michigan whose time was 2h:30m:16s. Missy’s swim time of 24:48 was the second fastest split only to Karen Mckeachie’s 24:46 when considering any of the 70 contestants in the age group. The Olympic distance is composed of a 1500 meter swim, 40 kilometer bike, and 10 kilometer run.

AJ Reid was another local, and former TNT swimmer, who competed at this year’s Nationals, and placed 21st in his age division of 20-24 year old triathletes that totaled 110 contestants. AJ’s swim time of 19:27 was the 10th fastest among the field, and his overall time of 2h:00m:31s was only six minutes behind Ann Arbor’s Lois Cayedito’s time of 1h:54m:35s.