Although not all teams attending the Winter Age Group Championships maintain a quality of athlete to score points at the meet, where only the top 8 individuals swim finals and the top 16 individuals score points, 37 teams did score with points ranging from Mission Viejos 3,478 points to Max Aquatics 3 points. Our TNT Winter Age Group Team of 27 swimmers scored enough points (826) to place the team as the 12th highest performing team at one of the largest age group championship meets in Southern California Swimming.

Sixteen of our 27 athletes generated scores in individual events while at the meet, and these were led by 10-year old Skylar Ford of Visalia who swam away with a championship win in the 50 yard butterfly event with a time of 30.33, three runner up events that included the 100 breaststroke (1:19.20), 50 free (27.61) and 50 breaststroke, as well as third place finishes in two events where she set team records. These two events included the 50 back (32.84) and 100 free (1:00.99) events. Skylar had set the 100 free record at the Merced meet earlier as a 1:02.57. Only 41 other 10-year old girls swam as fast in the 100 free anywhere in the nation this year. Jill Edminster had previously set the 50 backstroke record at Far Westerns in 1990 with a time of 32.96, and now Skylars new record stands as the 82nd fastest time in the nation for any 10-year old girl.

The table below reflects all 16 swimmers point accumulation from individual events. 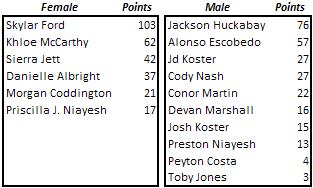 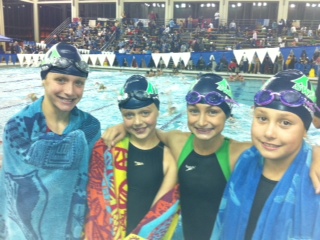 The remaining team points came from relay swims that contributed to well more than half of the overall team points. Every relay that TNT participated in scored while at the meet, and three of them resulted in new team records. Our first record-breaking relay was the 15-over 800 freestyle relay composed of Josh Koster, Noah Haworth, Cody Nash and Conor Martin whose time of 7:27.58 was under the 7:36.13 that Colin Landweer, Nathan Rhea, Sam Hansen and Thomas Brown had set as the record in 2010 at Junior Olympics. The 11-12 boys relay of Alonso Escobedo, Preston Niayesh, JD Koster and Jonas Huckabay reset the 11-12 boys 400 Medley Relay by a large margin swimming 4:27.00 for a 3rd place medal and resetting the 4:42.06 record established by Micah Ruiz, Preston Niayesh, Parker Giles and JD Koster at Junior Olympics last year. The CCS Record in that event is 4:17.65 and our TNT boys time currently stands as the 30th fastest time nationally, with eight of the top-30 times resulting from one of the three Winter Age Group Championship meets that took place over the weekend. Our final relay record was set by the 10-under girls Priscilla Niayesh, Daniel Albright, Skylar Fordand Katherine Sullivan whose time of 2:19.94 in the 200 Meldley Relay went under the 2:21.13 time that was set as the record by Janessa Bringe, Daniellle Albright Pricilla Niayesh and Skylar Ford also at last years Junior Olympcis. The current CCS Record stands as 2:12.52.

Preston Niayesh joined Skylar Ford as the only other individual to set a team record at the meet, and he did so with a time of 2:40.80 in the 11-12 boys 200 breaststroke event with nearly a six-second improvement in the event. The previous record was held by Chris Hansen as 2:42.23, and set at the San Luis Obispo meet three years ago in 2009. Prestons time currently stands as the 118th fastest in the nation for any boy at age 12.

Preston was also among eight TNT swimmers who improved 100% of their times at the meet. He is joined by Jonas Huckabay of Selma who improved 6 of 6 events, Sierra Jettwho also trains in Selma, and Conor Martin who all improved all six allowable events. Visalia swimmers Jimmy Koster and Paul Alexander Lerro improved each of their three events at the meet, while Andrea Morales improved both of her events. 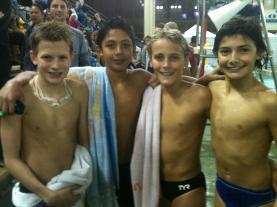 The following is a list of each swimmer along with an event that reflected one of their highest place finishes. Many of our swimmers competed while on the bottom of the age group, and are in prime position for a top-8 finish when they move to the top of the age group.