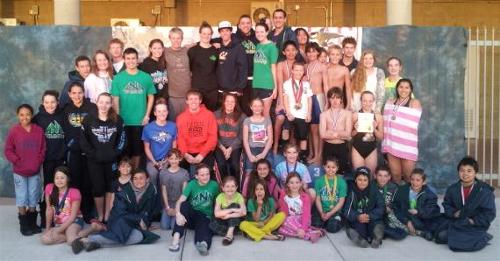 Tule Nation Tritons made an impact at both the 15-18 and 14-under divisions at the 2013 Junior Olympics winning its first title as a unified team of 71 individual swimmers representing the towns of Fig Garden, Hanford, Selma, Tulare and Visalia. Swimmers training in each of these towns actually represent towns such as Corcoran, Coalinga, Fig Garden, Hanford, Kingsburg, Lemoore, Porterville, Sanger, Selma, Tulare and Visalia as many swimmers sacrifice the time to commute to a central location with intent to achieve their desired goals on an individual level. Our overall team points placed the team in first by a margin of 1,142 with our senior swimmers (15-18) scoring 1,080 points on their own. Our 14-under swimmers alone combined to 2,382 points which would have maintained a margin of 191 points for the win if considering only the younger swimmers.
Thirty-three of our swimmers performed well enough in the preliminary heats to move on to the championship finals in a swim meet that hosted approximately 800 age group and senior swimmers. Scores from individual events alone contributed to 2,662 of the total team score. Congratulations to the following 33 swimmers for making it to the top-8: 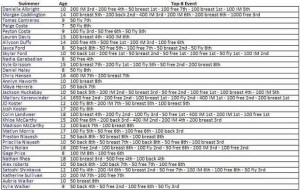 Two team records fell to 10 year old Jackson Huckabay of Selma who takes on the sprint tradition of the program by taking down both the 50 freestyle (28.78) and 100 freestyle (1:01.76) events. The 50 freestyle record was previously held by Parker Giles, who set the record at Far Westerns in 2010. Jackson’s time is currently 252nd fastest nationally among all 10-year old boys. Only 130 ten-year old male swimmers have swum as fast a Jackson in the 100 yard freestyle since September, and his time of 1:01.76 from Junior Olympics also broke Parker Giles’s record that once again was set at Far Westerns in 2010.

Fourteen year old Mallory Korenwinder posted a time of 1:04.22 in the 100 breaststroke that outperformed her time that was swum at Short Course Junior Nationals this past winter. Her time not only takes down her previous team record, but also improves both the CCS 13-14 record, which she set Junior Nationals, as well as the CCS Senior record that was held by Jorie Caneta as a 1:04.27 and set at Sectionals this past December. Mallory’s time currently stands as the 8th fastest time in the nation for all girls of age 14.