Thirteen TNT swimmers competed at the recent return of the Southern California Swimming Winter Senior swim meet held over the December 19-22 weekend resulting in two new qualifying times for the NCSA Spring Championship meet to be held in Orlando, Florida over the March 18-22 week. This is a meet that is steeped with competition, and has as its time standard an earlier USA Junior National time in order to qualify.

A our current team record holder in the 100 yard butterfly event, fifteen year old Selma swimmer Sierra Jett already had one cut in the event when she swam 57.82 at the Terrapin meet this past November. Now, being one of only two championship finalists for the team at the Winter Senior Meet, Sierra made her second cut in the 50 freestyle with a time of 24.19 resulting in a championship final, and a new team record in the event. Megan Eppler swam at this very meet (Winter Invitational) in 2007 with a time of 24.42 as the previous record. Sierra’s current time now stands as the 90th fastest nationally for all 15-year old girls. She also swam to a 13th place finish in her 100 fly, posting a time of 58.42 in that event.

The second NCSA cut came from Selma teammate, Emily Goodbar, who swam 2:05.49 in her specialty event, the 200 fly. Emily is our team record holder in the meter version of the event, maintaining the top 7 times in the long course pool, while holding eight of the top nine times in the history of the team  for the short course race. Emily was our top finisher at the meet with a bronze medal performance in the 200 fly, moving from a sixth place seeding into finals, and was thereby our top point getter. She also finished 15th in the 100 fly after swimming a preliminary time of 58.27. Emily earned second swims in three of her four events with a bonus showing, and 20th place finish, in the 200 IM after swimming a 2:12.08 in the preliminary heats. 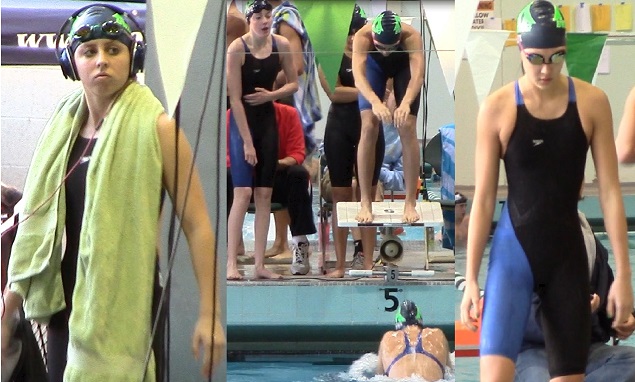 Her freestyle prowess, exemplified by currently holding eight of the team’s freestyle records when considering short course and long course races and combining the 13-14 and 15-18 age groups, was further demonstrated by earning second swims in the 50, 100 and 200 freestyle events at the Winter Senior Meet. Jillian Hatch, also of Selma, was our next highest point contributor as she scored from the consolation heat in three of her five events, the highest place being 12th in the 200 freestyle with a time of 1:54.31. She followed this with a 13th place finish in the 100 free (52.90), and a 15th place finish in the 50 free after swimming a 24.48 in the preliminary swim.

Our final swimmers moving into a scoring finals was Khloe McCarthy, who did so with a time drop to 4:36.78 in the 400 IM, and a 13th place finish there. Khloe competed in five individual events, and earned a second swim in four of those five. Her next highest finish came in the 500 freestyle, swimming her second fastest time of 5:09.42 in the event. Her 200 backstroke time of 2:09.35 was second only to her Terrapin performance of November, and was enough for a 19th place finish there. She swam her fastest club time in the 100 back event with a time of 1:02.07 resulting in a 20th place finish there. 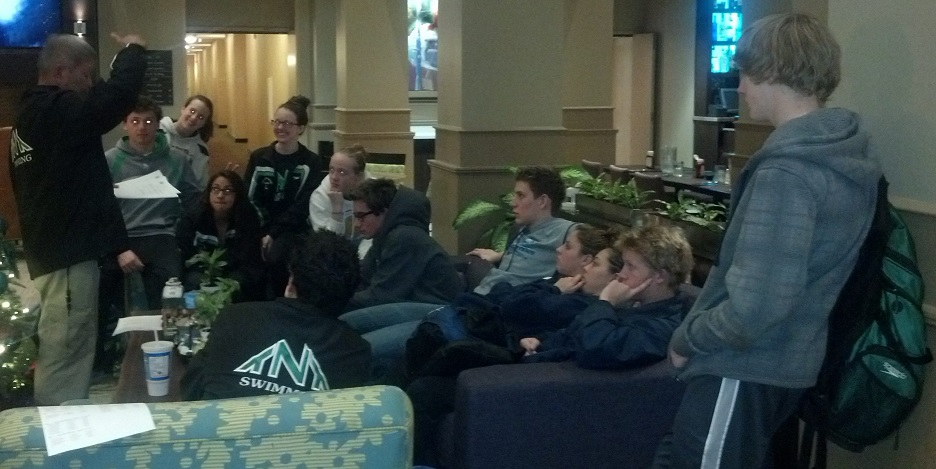 Chris Hansen earned his spot for a second swim in the 200 breaststroke event, where he moved up three places from 24th to 21st and a time of 2:14.56. He was one of only two swimmers to improve all events entered at the meet, dropping nearly three seconds in the 200 breaststroke alone. Joining Chris in the bonus finals was Selma swimmer Cody Nash, swimming a 2:16.31,and finishing 23rd in the event. Katelyn Herrera was our other bonus finalist, finishing 21st in the 500 freestyle with a time of 5:15.93.